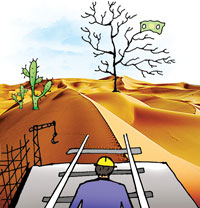 MUMBAI's Metro rail project has hit a roadblock. The regional planning authority, executing the project, is facing shortage of funds.

In July, the Mumbai Metropolitan Region Development Authority (MMRDA) approached the World Bank and Japan Bank for International Cooperation for a Rs 20,000 crore loan. MMRDA plans to use the amount for constructing seven metro corridors; work on two is under way. Recent reports say the cost of the 146 km Metro network, comprising nine lines, has escalated from Rs 19,525 crore to Rs 47,092 crore. The MMRDA approached international banks for the third line of Metro, the 20 km Colaba-Bandra line. A section of the line would be underground: per kilometre cost of underground Metro is Rs 635 crore as against Rs 235 crore for an elevated corridor.

So far, MMRDA has been using viability gap funding for the project—Rs 2,356 crore for the Versova-Andheri- Ghat-kopar line and Rs 8,250 crore for Char-kop-Bandra-Mankhurd. Viability gap funding is a Central scheme wherein projects with low financial returns, executed through privatepublic partnership, are given grants of up to 40 per cent.

The viability gap funding for the Metro's first two lines was 20 per cent. "Due to the underground section of line 3, this gap funding is expected to exceed 40 per cent," an MMRDA official said. P R K Murthy, chief of transport and communication division with MMRDA, said, "We are only exploring options."

Simpreet Singh, an activist working among communities affected by infrastructure projects in Mumbai, asked, "Why invest in such costly transport projects that do not attract enough ridership?" (see 'Carriage of convenience', Down To Earth, April 15, 2010.) Bina C Balakrishna, a transport planner in Mumbai, said recovering the Metro project's cost would not be easy. "It can be partially recovered through advertisements, but if the tickets are too high, chances are Metro will lose passengers," she said.