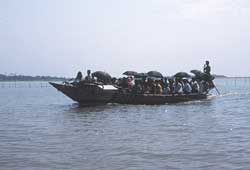 The recent report of the Comptroller and Auditor General (cag) reveals that the 10th Finance Commission had granted Rs 27 crore for the preservation of the Chilka lake. But only Rs 30 lakh were earmarked in the approved consolidated plan of action for Chilka. This amount, which was to be used for the improvement of road networking in the area, was hiked to Rs 4.70 crore without the requisite approvals. The governing body of cda, that increased the amount, neither sought nor received any approval for doing this from the interministerial committee.The cag report further points out that Rs 0.85 crore out of this 4.70 crore was lying unspent in the public works deposit account of Khurda roads and buildings division, which had been allotted Rs 2 crore for the road work. Due to irregularities, the cag commented that the objective of the fund was being defeated.