Clean drinking water is a fundamental right, states the Supreme Court and wants government to set up environmental courts 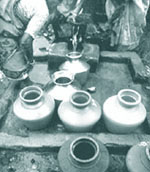 clean drinking water is a fundamental right of all citizens, ruled the Supreme Court recently. The apex court said that Article 21 of the Constitution guaranteeing right to life also includes the right to clean drinking water and the state is duty-bound to provide it. The apex court has asked the Union ministry of law to review the existing environment laws so that environment courts could be set up for its enforcement. More importantly, the apex court has directed the law commission to explore the legal possibility of involving environmental scientists and experts in the green courts. The law commission is the nodal body of the government, that has the authority to review all existing laws.

"The verdict carries forward the court's constant emphasis on the right to clean environment," says P P Rao, a constitutional lawyer and the former president of the Supreme Court's Bar Association. Quoting the 1977 resolution of the United Nations Water Conference that pledges access to clean drinking water for everybody, to which India is a signatory, the apex court said that today environmental rights are described as "third generation" rights, the first and second generation rights being political and socio-economic rights respectively.

The verdict was given by a division bench of the Supreme Court that set aside an earlier order of the Andhra Pradesh high court. The high court had allowed a polluting industrial unit to operate near Hyderabad city's Osman Sagar and Himayat Sagar, two water reservoirs that are the source of drinking water to some eight million people of the city. The industrial unit, Surana Oils and Derivatives (India) Limited, was situated within 10 km of the reservoirs, contrary to a Union government order that prohibited operation of any industrial unit within the area. Despite this prohibitory order and non-granting of consent by the state pollution control board, the state government allowed the industrial unit to operate in the area. The state government granted a special exemption to the unit simply on the basis of an assurance by the unit that it would dispose off its effluents in a safe manner. "Grant of such exemption was without statutory backing and also wholly arbitrary and violative of Article 21 of the Constitution. Exercise of such a power in favour of a particular industrial unit must be treated as arbitrary and contrary to public interest and in violation of the right to clean water under Article 21 of the Constitution," the apex court ruled. Applying the 'precautionary principle approach' the court observed that the mere assurance of the industrial unit that it would safely dispose of its effluents is not sufficient. "

The verdict restores the prime importance of water and brings into focus the ignorance of our politicians and government officials about it," says M V Nayudu, a Hyderabad-based retired university professor who had filed the case against Surana Oils and Derivatives (India) Limited in the Andhra Pradesh high court. The wider ramification of the Supreme Court's verdict revolves around the court's insistence on environmental courts and inclusion of environmental scientists and experts in their judgements. The apex court ruling made it clear that scientific and expertise inputs are vital in case of environment related judgements. This was the only reason why the court rejected Andhra Pradesh high court order and asked three technical institutions, namely New Delhi-based National Environment Appellate Authority, Department of Chemical Technology, Bombay University, and Hyderabad-based National Geophysical Research Institute, to study the impact of the industrial unit on the reservoirs' water. These institutes stated that the industrial unit might contaminate the reservoirs. "Our efforts to get the best scientific evidence have yielded satisfactory results in the sense that we have today greater confidence about the correctness of our conclusions," said the court. "This aspect is important, as often due to lack of scientific knowledge, people don't get access to their rights through judicial process," says Nayudu.

Earlier the Supreme Court, had sought the opinion of various states and universities regarding the proposal to set up environmental courts, but the response was poor. Therefore, on the basis of a report of Cambridge University's department of land economy, uk , the Supreme Court has suggested the concept of environmental courts. The report visualises the working of environmental courts alongwith the participation of environmental experts and having powers of both judicial review and civil procedure. "The verdict's main catch is that when there is a dispute between individual and community interest, the community should prevail. To solve these disputes on common resources like water we need specialised courts as the verdict suggests," says Rao.