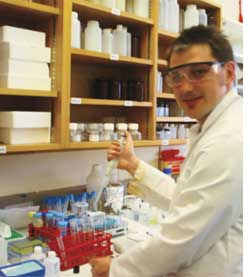 Living with plant roots, they're equipped to break down rocks

physical elements like wind and water are largely believed to disintegrate rocks. Certain symbiotic fungi should be added to the list. The fungi grow on plant roots and help the plants extract nutrition from the rocks they break down. In a way, they initiate the weathering which is taken over by physical agents. A study for the first time elucidates the interaction, at the nano-level, between fungal filaments and biotite flakes--a rock-forming mineral rich in potassium, iron and magnesium. This interaction has a far-reaching consequence--it decreases global warming.

A team led by earth scientist Steeve Bonneville from the University of Leeds allowed a fungus, Paxillus involutus, to grow in symbiosis with pine (Pinus sylvestris) roots for 10 weeks. These were then replanted in a transparent pot with flakes of biotite as substrate; the activity in the pot was observed for 3 months. The fungi did their job in two steps: first they grew over the rocks, weakening them by physical pressure and then attacked them chemically.

Microscopic examination revealed the rocks' mineral structure disrupted due to pressure from the expanding fungi. Chemical analysis indicated that the portion of the rock directly exposed to the fungi and as much as two micrometres away from the fungal-rock attachment lost 70 per cent of its potassium content. The rocks disintegrated into minerals that soil is commonly composed of.

"It is globally estimated that soil erodes 100 times faster than the speed at which they form. Hence it is crucial to know what these fungi are capable of. New management tools for soil preservation need to be developed," said Bonneville. The study was published in the July 2009 issue of Geology.

Subrata Sinha, ex-chief geologist from the Geological Survey of India in Kolkata, said the process benefits the fungi too. The fungi extract nutrients for the plant which provides them with essential ingredients for their own food.

Weathering of rocks increases the mineral content of water bodies. "Availability of nutrients promotes growth of phytoplanktons. They sequester vast amounts of CO2 that later sediment in the ocean bed. Hence weathering of rocks plays an important part in reducing the impact of global warming," said Bonneville.