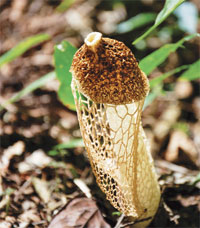 “IN THE plant world, close relatives make bad neighbours. It has been long known that seedlings growing near plants of the same species are more likely to die and it was suspected that something in the soil was responsible. We’ve now shown that fungi play a crucial role,” says Owen Lewis, senior author of a study which claims that fungi play a key role in increasing biodiversity in tropical rainforests.

Plants usually grow close to each other in tropical rainforests. Pathogenic fungi can spread quickly between plants of the same species, preventing competitive species from dominating and allowing rarer species to flourish.

For the study, the team established 36 sampling stations within one hectare in the Chiquibul Forest Reserve in Belize. Each station had three seed traps (to capture and quantify seeds popping out from the seedlings) and four seedling plots. The plots were randomly assigned to four treatments: control (sprayed with water), insecticide (Engeo), or one of the two fungicides (Amistar or Ridomil). The treatment was applied weekly for 17 months. The researchers recorded the number of seeds from each species collected in each trap every week. The number and identities of seedlings germinating in each plot were recorded monthly during the peak flowering period (April to August) and every two to four months otherwise.

The data showed that fungicide treatment dealt a significant blow to diversity, reducing the effective number of species by 16 per cent. On the other hand, the insecticide did change the composition of surviving species, but did not have an overall impact on diversity. The findings also prove correct a hypothesis given by Daniel Janzen and Joseph Connell in the 1970s which had linked pests and diseases to high levels of biodiversity in tropical areas.“We found that abundant species failed to survive and rare species thrived. We expected the removal of both fungi and insects would have an effect on species diversity. However, removal of the fungi affected diversity, but that of insects did not,’’ says Lewis. “Diversity helps ecosystem sustain against changes in the environment, like climate change. It ensures the ecosystem does not collapse if something changes,” he adds. The study, led by Oxford University, UK, was published in the January 22 issue of Nature.

“This is an important piece of work, since it demonstrates one way in which the high species diversity observed in the tropics can be maintained,” says Tom Fayle from Forest Ecology and Conservation Group, Imperial College, London. As the authors say, the study needs to be replicated at other locations around the worldÃ”Ã‡Ãªto see if the pattern is universal and it would be interesting to see whether there is a latitudinal pattern to indicate the importance of fungi in maintaining tree diversity, Fayle adds.