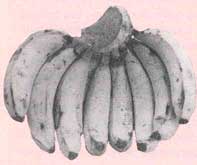 US scientists have found what makes fruits such as bananas, avocados and tomatoes, vulnerable to fungal diseases that destroy up to 50 per cent of the produce post-harvest.Moshe Flaishman and Pappachan Kolatukuddy from Ohio State University's Biotechnology Center found that the hormone that triggers the ripening of fruit also informs the fungi when to attack (New Scientist, Vol 143, No 1940).

The researchers say the fungal spores attach themselves to the growing fruit but lie dormant till the fruits begin to ripen and are plucked. This they say allows the fungi to save themselves from retaliation by the parent plant, which releases chemicals fatal for the fungi.

They found that tomatoes that were genetically engineered not to produce ethylene -- the ripening-inducing plant hormone -- were left untouched by fungi.