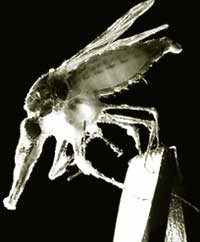 fungi commonly used as biopesticides for paddy and coffee cultivation in India may be equally effective against malaria-spreading mosquitoes, claim scientists. Two independent research papers published in Science (June 10, Vol 308, No 5728) claim spraying spores of these fungi on walls and clothes can not only kill mosquitoes but also reduce significantly their ability to transmit malaria.

While the team led by Mat Thomas of uk's Imperial College used eight different strains of Beauveria bassiana and Metarhizium anisopliae with varying degrees of effectiveness, Bart Knols and his colleagues at Netherlands' Wageningen University together with Gerry Killeen of the Ifakara Health Research and Development Centre in Tanzania worked with M anisopliae. B bassiana is used in coffee plantations to deter coffee berry borer pest and M anisopliae is used in rice fields to control brown planthopper in several countries.

Knols and his team found the use of cotton sheets impregnated with the fungus, when hung from ceilings of five houses in a Tanzanian village, drastically reduced malaria transmission by Anopheles gambiae adult mosquitoes. A gambiae is Africa's main malaria vector.

Another malaria vector, the Anopheles stephensi mosquito, was similarly affected, according to the study conducted by Thomas and his team. When exposed to the fungi, the mosquitoes were found 80 times less likely to transmit malaria. The study was carried out on a form of malaria that infects rodents. The scientists first sprayed cardboard pots with fungal spores suspended in oil. Twenty-four hours later, they introduced mosquitoes that had taken a blood meal and left them inside the pots for two weeks. In six of the eight such tests, more than 80 per cent of the mosquitoes were found dead.

Death is not always quick, but it does not need to be. Mosquitoes cannot transmit malaria until about two weeks after picking up the malaria parasites with a blood meal. The fungus also affects mosquitoes' ability to feed, making them less likely to spread malaria.

Fungal spores score over other biological agents such as bacteria or viruses because they require mere contact with the mosquitoes to infect them. The spores germinate and penetrate the insect's outer surface, before spreading inside them. But bacteria and viruses have to be ingested before they can act.

Thomas's team showed that even a brief six-hour exposure to a 12-day old fungal spray killed 89 per cent of mosquitoes . They say fungal biopesticides could replace or supplement chemical-based control strategies, especially in areas where mosquitoes are developing resistance to pesticides.