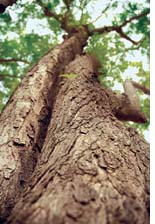 neem is touted as an eco-friendly insecticide. Almost all parts of the tree--seeds, leaves, flowers and bark--have anti-microbial properties. But it seems some of these properties are due to a host of fungi living inside the plant.

At least 18 types of these endophytic fungi (from different taxonomic groups) are present in various parts of the neem, and add to the plant's anti-microbial properties, says a group of researchers from the Banaras Hindu University (bhu), Uttar Pradesh, and the University of Montana, usa.

The study is likely to shift the focus of researches on the neem tree to its endophytic fungi and the bioactive chemicals they produce. The findings were recently published in the journal Microbial Ecology (Vol 54, No 1).

The study is not the first of its kind.Almost all endophytic fungi produce bioactive chemicals, which have great potential for agricultural and pharmaceutical industries. Earlier, Gary Strobel from the University of Montana, also the co-author of the research paper, had found a similar endophytic fungus, Taxomyces andreanae. The fungus thrives on the pacific yew (Taxus brevifolia)--a conifer native to the northwest of North America. Strobel found that the fungus produces a bioactive chemical, taxol, similar to that produced by the the tree. Taxol is commonly used for preparing anti-breast cancer drugs.

Analysis of samples (various parts of the neem plant) collected from three different locations of India found that four of all the fungi-- Aspergillus, Cladosporium, Phomopsis and Trichoderma sp--remained dominant in the plant irrespective of its geographical variation. Most of the fungi were found concentrated on the leaf.

"Till now we have found anti-bacterial properties only in one fungus. Research work is going on to understand the properties of other fungi," says R N Kharwar from bhu, one of the authors of the paper.

The study is also an attempt to understand the bioactive chemicals produced by these fungi. "We have made a comprehensive list of all the endophytic fungi of neem," says Kharwar.

The study is significant for India, since neem is native to the country. The tree has so far remained under-researched in the country.