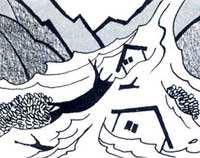 THREE thousand people are feared dead in flash floods caused by heavy rains in northeastern Afghanistan in the first week of September. A nine metre-high tidal wave brought torrents of mud and boulders down three river valleys in the Hindu Kush mountains sweeping away hundreds of houses. Thousands of hectares of crops and kilometres of vital irrigation canals were destroyed or choked with mud. A large number of the houses destroyed had just been rebuilt by villagers who have returned home after 14 years of civil war. Flood intensity grew as the artificial dams of trees and mud blocking the Panjsher river broke.

The Afghanistan government has set up a commission to help the survivors. But lack of funds may proveto be a big stumbling block. In-fighting has left the four- month-old Islamic government in a shambles and has led to a drastic fall in international help. Given the situation, it may be weeks before relief actually reaches the survivors.