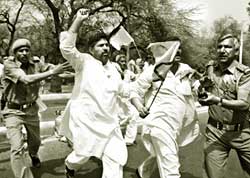 for the first time ever, the g 20, a group of developing nations within the World Trade Organization invited non- g20 developing nation groups to their ministerial meeting, held in New Delhi on March 17-19, 2005. The move was largely viewed as an effort to increase the g 20's legitimacy within the developing world and display the unity of developing nations against the interests of the North. During the meeting, the g 20 voiced the need for greater emphasis on development in wto negotiations on agriculture. It called for formulating an outline of a pact, including formulae and approaches, for the December 2005 wto ministerial meeting in Hong Kong.

In another first, the g 20 proposed a concrete end date for developed countries export subsidies, with a specific subsidy reduction formula: that they end in "no longer than five years with front loaded commitments", meaning the initial reductions should be large. It also repeated its demand for reducing developed country domestic subsidies and advocated no reductions in developing country subsidies. Regarding access to developed country agricultural markets, it said it was "concerned that technical questions were being used for bargaining purposes". This observation was prompted by a stalling of the agriculture negotiations in Geneva the day before the meeting. One delegate said the eu had withheld data on its current agricultural import duties, a key information needed for a formula to reduce import duties. While many delegates termed this as a 'minor setback', they admitted that the lack of agreement on a formula could stall the negotiations.

In view of the interests of the non- g 20 nations invited to the meet -- the Africa Group caricom (Caribbean Community), the Least Developed Countries group and the g33 -- the g 20 declaration acknowledged that some of them would be harmed by cuts in agricultural duties by developed countries. "Though the move to include other developing countries is positive, it remains to be seen whether the language is merely for show or a genuine move by the g 20 to represent other developing country interests," said Cline Charveriat, head of advocacy at Oxfam, a non governmental Organisation (ngo). But the meet's general mood can be gauged from the Caribbean group calling the g 20 "natural allies" and approving the declaration.