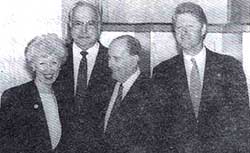 THOUGH retaining environmental issues high on their G-7 policy agenda, the leaders of the world's seven richest nations confirmed their determination to maintain the global Environmental Fund (GEF) as the sole funding agency for implementing the biodiversity and climate change conventions, adopted in Rio last year.

In doing so, the G-7 leaders meeting in Tokyo recently, ignored doubts expressed by developing countries, who fear that will be solely with the developed nations. They are also concerned about the wisdom of allowing a solitary funding facility monopoly control of environmental programmes.

The seven leaders stressed the importance of the concept of "good governance" and stated that future aid to developing countries will be tied to this. Their summit declaration expressed serious doubts about a solitary fund dealing with a diversity of environmental conventions.

Another conflicting issue is the concept of environmental costs. The Third World says it is unfair not to provide a reasonable rate of return in the national context.

The G-7 leaders refrained from any mention of the 1995 UN summit on social issues.