71 per cent of those with dementia will be in lower and middle-income countries by 2050, says report

A report predicting a shift in the global burden of dementia from rich countries to the poor countries precedes a G8 summit called to discuss the rising health problem. The  United Kingdom is hosting the G8 summit on dementia in London on December 11. The meet aims to develop a co-ordinated global action on dementia.

Alzheimer’s Disease International (ADI), which launched a policy brief prior to the summit, said that the number of people living with dementia worldwide in 2013 is estimated at 44 million. It estimated that their number will touch 76 million in 2030 and 135 million by 2050. ADI is the international federation of 79 Alzheimer's associations throughout the world.

The policy brief—The Global Impact of Dementia 2013-2050—reports a staggering 17 per cent increase in global estimate of people living with dementia, compared to the original ADI estimates in the 2009 World Alzheimer’s Report.

Earlier, ADI had published global prevalence data on dementia in the World Alzheimer Report 2009, which estimated 36 million people with dementia in 2010, nearly doubling every 20 years to 66 million by 2030 and to 115 million by 2050. Now it has changed its estimates (see graph). 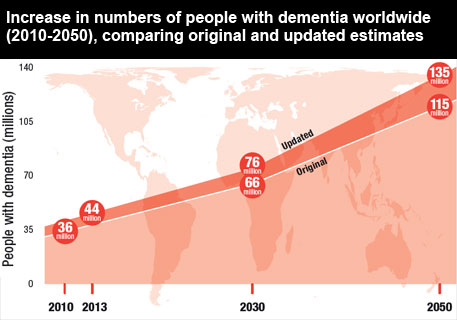 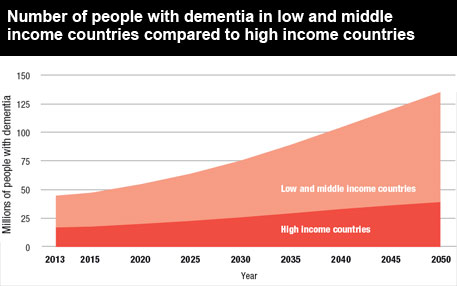 The document concludes that most governments in the world are not prepared for the upcoming epidemic. Only 13 countries have implemented a national dementia plan so far.

There is urgent need to initiate a national dialogue regarding future provision and financing of long term care. ADR suggests that research should become global priority, which should include concern of improving the quality of coverage and care of the disease, finding new treatments and prevention models. Equal priority should be given to policy making, health and social care service and health system development, it suggests.

Can the epidemic be checked?

It further says that the future scale of the dementia epidemic may be blunted through improvements in population health, but the best estimates suggest that only up to 10 per cent of incidence may thus be avoided. “Public health and disease control measures targeting smoking, under-activity, obesity, hypertension and diabetes should be prioritised. Education and other factors that enhance brain and cognitive development will also improve the brain health of those entering old age, and reduce the incidence of dementia in late life,” it adds.