Finding throws new light on the evolution and ageing of galaxies 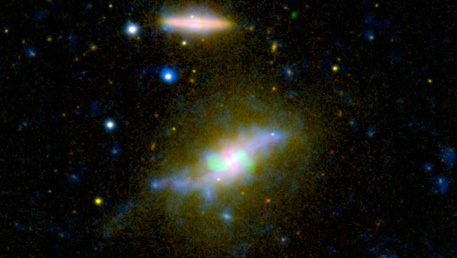 A faraway galaxy, NGC 3801, is undergoing massive transformation—from a bright star-filled galaxy, to an almost-dead one with few stars. Ananda Hota, a Pune-based astronomer, made the discovery in association with US space agency NASA.

Hota, who hails from Odisha, conducted the study during his post-doctoral fellowship at the Institute of Astronomy and Astrophysics at Academia Sinica in Taipei, Taiwan.  In September last year, Hota had discovered a peculiar new galaxy called Speca—a groundbreaking astronomical feat. Speca, like NGC 3801, is an elliptical galaxy. An elliptical galaxy is formed when two spiral galaxies like the Milky Way—the one our solar system is a part of—collide. Spiral galaxies constantly give birth to new stars, but elliptical galaxies, on the other hand, are ones that have lost the ability to produce new stars. Speca is one of two elliptical galaxies whose core—essentially a black hole—is sending out sub-atomic particles jet streams.

NGC 3801 is now on the verge of becoming an elliptical galaxy like Speca. "We have caught a galaxy in the act of destroying its gaseous fuel for new stars and marching towards being a red-and-dead type of galaxy," says Ananda Hota, whose latest findings will appear in the Monthly Notices of the Royal Astronomical Society. "Both Speca and NGC 3801 have been caught at a special transitional phase of their lives, revealing details of galaxy evolution," Hota adds.

The discovery was made primarily through the Galaxy Evolution Explorer (GALEX) and NASA's Hubble Space Telescope. GALEX is an orbiting space telescope, observing galaxies in ultraviolet light across 10 billion years of cosmic history. It is operated and monitored by California Institute of Technology.

Data shows that star formation in the galaxy stopped some 100 to 500 million years ago. Hota has delved into why NGC 3801 is headed towards such a fate. After several galaxies fused to make it, short-lived blue stars were formed. These stars have died, causing massive explosions called supernovae. Because of the explosions, cold gas, which produces new stars, is leaking out of the galaxy. Very little star formation is currently happening in the galaxy. Plus, the galaxy’s black hole is sending out huge shock waves of sub-atomic particles—a process which is hastening the ageing process of the galaxy.

Hota says: “The explosive shock wave event, caused by the central black hole, is so powerful that it can dramatically change the future course of the evolution of an entire galaxy."