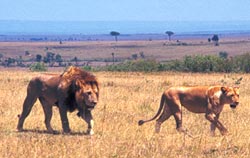 Will African wild land be colonised again? Moves by Dutch tycoon Paul van Vlissingen to buy some national parks of Zambia, Malawi, Uganda, Kenya and Mozambique have split the continent's polity down the middle. A debate that many thought had been buried along with apartheid has thus been rekindled.

Vlissingen already runs the Marakele National Park, located north of Johannesburg, and has a 25-year agreement to manage Majete, a state-owned game sanctuary that is also sited in South Africa. The business magnate is reportedly backed by the World Bank, the us state department, and Prince Bernhadt of the Netherlands -- patron of the World Wide Fund for Nature (wwf). Former South African President Nelson Mandela has also endorsed Vlissingen's 'takeover'. Covert parleys supporting privatisation have allegedly been held between two former Kenyan Wildlife Service directors and influential non-governmental organisations (ngos) in Johannesburg as well.

The pact is all but inked for Zambia's Sioma-Ngwezi and Liuwa national parks, suggest sources. "(Even as the Zambian government is finalising the agreements) it is denying that these two parks are being leased," alleged Zambian opposition leader Sakwiba Sikota. When Down To Earth sought a response from L M Choombe, the first secretary in the Zambian high commission in New Delhi, he was non-committal. "The issue has not been settled yet; I cannot comment on it," he said.

In Kenya, where the law bars privatisation of parks, environment and natural resources minister Newton Kulundu has opposed the selling off of "national heritage". In related developments, Richard Leakey, a former director of quasi-statutory body Kenyan Wildlife Service, and Harold Wackman, ex-director, World Bank, have created a us $480 million regional wildlife endowment fund to finance conservation in Kenya, Uganda and Tanzania. Kulundu has accused Leakey of using the fund as a front to take over the running of parks in the region.

But even hardcore critics of the privatisation plan admit that these wildlife havens are hard-pressed for funds. All of Kenya's 29 state-owned parks and 27 reserves don't raise enough revenue to sustain themselves.

The larger debate, some observe, is about the future of these exclusionary parks that are increasingly being looked upon as a colonial legacy. While some African countries want to abolish them altogether, others are keen to embark on a path of reorientation.

Will Africa find a way to preserve its rich biodiversity even as it hands over the parks to private interests? Today, only the powerful few in these nations have the answer.