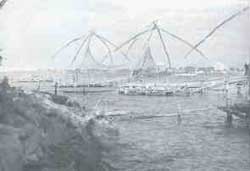 VYPEEN island, about 21 km long and 2 kno wide, recently made news with the formation of an island development authority which plans to build a bridge connecting it to mainland. Situated north of the Kochi fort, t Kochi kayal (Kochi backwaters) sel rates Vypeen from Ernakularn city the mainland.

With the Goshree Islands Develepment Authority (61DA) formed in by the Kerala government, an estimated 80,000 islanders who ferry to and I from Ernakularn hoped that the decades-long demand for a bridge would end.

But when details of the Rs 506-cr Goshree project were forma announced, many foresaw largesc environmental degeneration and land deal possibilities with the project implementation.

The 3-phase GIDA plan includes construction of 6 bridges and intensive tourist infrastructure by reclaiming about 362 ha of backwaters Thanthonni, Botghatty and Vallarpa dam islands between Vypeen and Ernakulam.

While considering the importance of the Kochi backwaters as a buffer zone between the Arabian Sea and the Vembanad lake, environmentalists not support any further reclamation this waterbody. Available statistics that the lake has already reduced 12,700 ha from 36,500 ha at the end the last century.

Now, the GIDA plan intends convert 362 ha of the waterbody reclaimed 'real estates'. The plan envisages dredging of a large area for building. Bridges affecting salinity intrusion from The sea and also talks of developing the Cherayi beach inVypeen as a tourist center.

Jacob Vadakkamcherry, general secretary of 'Swaraya Vyapeen', a voluntary organization, siid, "it is evident that the busiam deal. A group of tly behind this we eviden institute had green signaled project.

These studies, however, are insufficient for implementing the Goshree project feel P K Raveendran, state president, Kerala Sastra Sahitya Parishad (Kssp), and a Vypeen resident. But under salvos over the recent months, GIDA authorities have softened their reluctance to admit the seriousness of environmental aspects behind the mega project.

On July 17, Ernakulam's district collector declared that the GIDA plan Would be reviewed, taking into account criticisms levelled against it. He assured that all relevant documents would be made available for public scrutiny, and hinted that only minimum backwater area would be reclaimed. The Kerala high court underlined in its strong verdict on a petition filed by the Kssp to uphold the right of the citzens to know the plan's details.

Protestors were surprised to note that the Union ministry of environment and forests had issued a clearance to the project which recommended a physical model and a computer-based simulation study by a national hydrological institute, unfulfilled by GIDA. The study would take at least 8 months to complete. And only now, the study - costing Rs 4.5 lakh - by the Central Water Power Research Station, Pune, has begun. Although laying of the project's foundation stone by the Prime Minister sometime in September/October is expected to be postponed, Kerala chief minister A K Anthony, while chairing the 4th general council meeting of the GIDA council on August 16, dispelled fears that the project's implementation will be delayed.