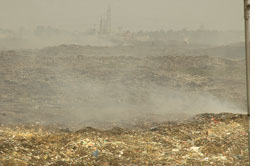 five union ministries are jointly planning a waste-to-energy plant in India. The plant will come up in a large city and will be modelled after the pilot plant in Hyderabad which is said to be generating 6.5 mega watt of power. Though officials claim the plant will help convert a huge amount of municipal solid waste (msw) into energy, there is a debate over the efficiency of methods like incineration to generate energy from waste to energy (see 'Pandora's garbage can', Down To Earth , March 15, 2007). The ministries of urban development, environment and forests, earth sciences and the ministry of new and renewable energy (monre) are part of the project.

Union Minister of Science and Technology, Kapil Sibal, announced the decision on October 26 at the Environment Summit, 2007: Waste to Wealth, Innovations and Emerging opportunities, organized by the Associated Chambers of Commerce and Industry. Urban India annually produces 42 million tonnes of msw which does not get recycled, Sibal said. India would be able to use efficient technologies for power generation from msw and the plan had great potential considering that large cities in the country daily generated 115,000 tonnes of waste, the minister added.

M Ramachandran, secretary of the urban development and poverty alleviation programme under the urban development ministry, said incineration of msw had "some issues" and "is not an option right now" in India. He added that the 12th finance commission had allocated us $2,450 million for disposal and recycling of solid waste for local bodies including municipalities.

Anil Dhussa, director, m o nre, also said incineration of waste was not the ideal solution since the waste collected in India has low calorific value and high moisture. Integration of current technologies such as bio-methanation, Refuse Derived Fuel (fuel made from shredding solid waste), composting and sewage treatment should be used while dealing with the waste, he added. However, some officials in the ministries concerned told Down To Earth that the authorities are planning to introduce efficient technologies at plant to be set up.