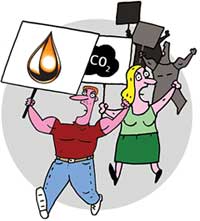 An e-mail that found its way to Greenpeace shows the US oil and gas lobby will give Barack Obama a tough time. The lobby is planning to stage public events to give the appearance of a groundswell of public opinion against a legislation that is key to the US president's climate change strategy. The e-mail has the president of the American Petroleum Institute Jack Gerard outlining plans to stage events during the autumn congressional recess to put a "human face" on opposition to energy reform.

Cathy Landry, the spokesperson of the petroleum institute, confirmed the veracity of the e-mail. The mail lays out plans to stage a series of rallies in 20 US states to reshape the climate bill passed by the US House of Represen-tatives in June. It will come before the Senate in September.

The petroleum institute's strategy extends to a PR drive. "We will provide the up-front resources. This includes contracting an experienced events management firm," the mail noted. Greenpeace's research director, Kert Davies, described the meetings as "astroturfing" -- events intended to pressure legislators by giving the impression of a groundswell of public opinion.