Residents of Mumbais Chembur suburb blame pollution from the nearby landfill for their lung ailments. A cardiologist, Sandip K Rane, wanted to find out if the Deonar landfill was also causing deaths. All he had was a 2008 study by Mumbais kem hospital that showed 82 per cent non-smokers in Chembur suffer reduced lung function. So, he filed a Right to Information application with the municipality in June this year. It helped.

Data from the municipalitys death records showed 25 per cent deaths in Chembur in 2007-2008 were caused by respiratory illnesses (see table below). In contrast, the figure for Matunga, eight km from Chembur, was only 0.41 per cent. The reasons cited for the deaths in Chembur included lung ailments like chronic obstructive pulmonary disease (copd) and asthma. The findings strengthen our campaign.Unscientific dumping of garbage at Deonar has caused extreme pollution and is a leading cause for deaths in Chembur, said Rane who is a member of the Smoke Affected Residents Forum, fighting a court case for closure of the dumpsite.


Rane now plans to submit the data in the high court that is hearing a contempt petition on the Deonar landfill. The residents forum had moved the contempt plea last year when the municipality failed to close the dump (see It stinks, Down To Earth, December 15, 2008).

Burning of waste at the site is a major source of pollution. A high court committee that visited the site recently found the bio-medical waste incinerator operating there is used for burning plastic bottles and syringes which is not allowed. The contractor admitted he mixed hospital waste including human body parts and bandages (these can be incinerated) with other waste, said Rane who is on the committee. Air quality studies also back residents claims.

A study by the Mumbai office of the National Environmental Engineering Research Institute (neeri) and kem hospital, in March this year, found that two localities abutting Deonar landfill had high concentration of formaldehyde (see table Poison in the air). Formaldehyde is a known carcinogen,said Rane. Near landfills, formaldehyde is produced when sunlight and oxygen react with methane released by the waste. Chembur also has industries like petrochemical and fertilizer units that release this chemical directly into the air. 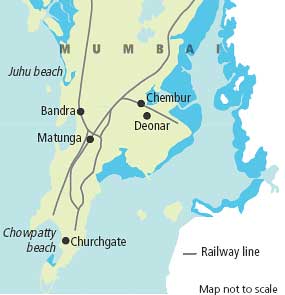 Rane, however, will need to produce more evidence to strengthen his claim. Amita Athawle who heads the kem hospitals Environment Pollution Research Centre said suspended particulate matter is very high in Chembur but genetic susceptibility, health history, smoking and drinking habits too have to be considered before linking deaths in Chembur with Deonar.

At best, morbidity can be blamed on pollution from the landfill, she said.

Solid waste management experts supported the residents. Amiya Sahu, president of the non-profit, Solid Waste Management Association of India, said the municipality had failed to close the Gorai dumping ground in a scientific manner and was repeating the mistake in Deonar.