Carbon dioxide emissions from power plants can be reduced by a process involving algae, sunlight, and a little common sense 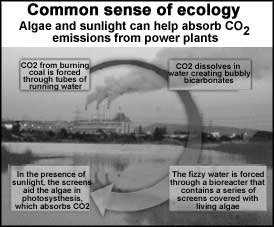 a team of scientists at Ohio University in the us is working on technology that uses algae, sunlight and the natural process of photosynthesis to absorb carbon dioxide ( co 2 ) from the combustion of coal. The result: reduced greenhouse gas emissions. co 2 has been identified as the single biggest contributor to global climate change. The Ohio University researchers, whose work is supported by a us $1.07 million grant from the us department of energy ( doe) , estimate their method could lower emission from an average-sized power plant by 20 per cent.

"The concept is to use something in nature to control carbon dioxide emissions,'' said David Bayless, assistant professor of mechanical engineering and lead researcher on the project. "Everyone is trying to do something chemically driven. We are trying to look at a way to augment nature's carbon recycling processes. In the long term, that is the way we really ought to look at things. This technology could be applied to any fuel-burning power plant," he added.

Bayless' scheme works like this: after coal is burned, co 2 headed for the smokestacks is forced through tubes of running water. The combination of co 2 and water creates bubby bicarbonates, ions that form when co 2 is made soluble in water. The fizzy water is then forced through a bioreactor that contains a series of screens covered with living algae. The screens are exposed to sunlight filtered by a special system of solar panels, satellite dishes and fibre optic cables. Scientists at the Oak Ridge National Laboratory, a partner in the project, developed the filtering system, which is also designed to redirect infrared light for use in photovoltaics.

The sunlight aids the algae in photosynthesis, the process by which plants create food necessary for growth. "Basically, the algae drink the bicarbonates," Bayless said. "They get carbon through this system much quicker than trying to get it out of the air. Oxygen is the other 'very nice byproduct' of this process," he added. After the algae matures, it falls to the bottom of the bioreactor, where it can be harvested for use in energy or agriculture. For instance, the algae can be used as fuel for biomass incinerators.

The researchers have developed a small-scale prototype in which they have grown about 0.9 kg of algae in a direct stream of co 2 exhaust under fluorescent lights. The doe grant will help them further develop the bioreactor and the sunlight systems. Bayless expects the technology could be implemented in about five years. He estimates that the cost of the system, averaged over 30 years, would be us $5-7 per tonne of co 2 removed from the exhaust.