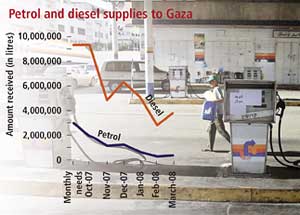 Since October 28, 2007, following a decision to declare the Hamas government a 'hostile entity', Israel reduced fuel supply to Gaza. Though the move was condemned by human rights activists, in January 2008, the Israel High Court of Justice authorized the fuel cuts. Since then there has been a steady decline in the amount of fuel allowed to enter Gaza.