As the biotech industry takes heart from the prime minister’s remark, a fresh report shows India’s regulation and expertise on GM crops are sloppy 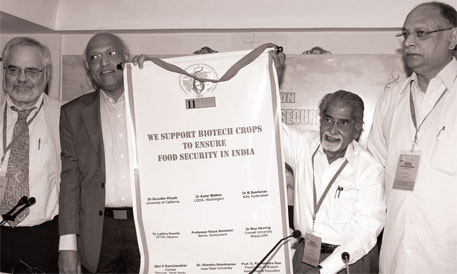 BUOYED by the prime minister’s remark that NGOs were responsible for the moratorium on the release of GM or Bt brinjal, the biotech industry is stepping up its campaign to get it lifted along with “all constraints in the research and development work of biotech crops”. It is also asking the government to ensure that the regulator, Genetic Engineering Approval Committee (GEAC), carries out its mandated functions without hindrance till such time as the Biotechnology Regulatory Authority of India (BRAI) becomes operational.

In what it calls the Bangalore Declaration, top industry lobby groups, the Association of Biotech Led Enterprises-Agriculture Group (ABLE-Ag) and the Foundation for Biotechnology Awareness and Education (FBAE), also urged the passage of the BRAI bill without further delay. The so-called declaration was made after a series of industry-sponsored conferences held across the country to plug biotechnology as the tool for guaranteeing India’s food security. While this has triggered a predictable counter-campaign by the anti-GM crops movement, an unexpected embarrassment for the government and industry is a fresh report that has exposed more flaws in the data supplied by Mahyco, the developer of the Bt brinjal event EE-1, and the unquestioning acceptance of its claims by GEAC and the two expert committees (EC-I and EC-II) that advised it.

The report by reputed geneticist and biosafety expert Jack A Heinemann has been submitted to the Minister of Environment and Forests (MoEF), Jayanthi Natarajan, under whose charge GEAC functions. Heinemann is professor of molecular biology and genetics at the University of Canterbury in New Zealand, and director of its Centre for Integrated Research in Biosafety (INBI).

His evaluation has vindicated once again the decision taken by Natarajan’s predecessor Jairam Ramesh in February 2010 to put on hold the commercial release of Mahyco’s Bt brinjal despite GEAC’s approval in 2009. Heinemann is the latest in a series of international scientists who have pointed out flaws in the Mahyco dossier on its EE-1 event (see ‘Holes in risk analysis of Bt brinjal’, Down To Earth (DTE), October 31, 2010). In his “cautious, precautionary principle-based approach” order, Ramesh had said the moratorium would stay “till such time independent scientific studies establish, to the satisfaction of both the public and professionals, the safety of the product from the point of view of its long-term impact on human health and environment”. Ramesh, now minister for rural development, had taken exception to Prime Minister Manmohan Singh’s implication in an interview given to Science (February 24, 2012) that the moratorium was the result of pressure from NGOs in the US and Scandinavian nations. In a rebuttal, Ramesh said his decision was determined by four factors: position of the states, lack of consensus among the scientific community, the fact that the tests were not completed and that there was no independent professional mechanism to instil confidence among people.

The Heinemann evaluation is scathing in its indictment of the developer, the regulators and the experts set by it. The most serious of the flaws, it points out, were the significant anomalies in the reporting of the constructs and in the characterisation of event EE-1. In addition, “it was apparent that critical and fundamental characterisation of the event was not completed, usually because of assumption-based reasoning [for example, the plasmid (or vector) does not transfer because the developer thought that it should not] that was often both faulty and also not confirmed by readily available science. When such fundamental misunderstandings of the basic tools of the procedure demonstrated by the developer seemingly went unchallenged by the regulator, it was very difficult to accept assurances that the other procedures in the evaluation of Bt brinjal could be trusted.” The GEAC comes in for particular censure because it “repeatedly failed to appreciate the significance of the plasmid map itself which clearly showed only a single T-DNA border sequence and ignored the reports from independent scientists who alerted EC II to this”.

The most alarming finding is that Mahyco’s Bt brinjal uses a binary plasmid vector PVLEBK04 that has at least 10 different DNA elements taken from different species, including soybeans, viruses, plasmids isolated from different species of bacteria, and many of which have also been extensively and separately subject to in-vitro modification after being taken from their natural sources. The commercial trait in Bt brinjal, according to Mahyco, is conferred by the Cry1Ac-like derived protein. However, Heinemann says the protein is not Cry1Ac isolated from natural plasmids of Bt but a protein made from a series of in-vitro modifications. The first 40 per cent of the amino acids found in Cry1Ac2 were replaced with 466 amino acids from Cry1Ab, another insecticidal protein.

Again, while the developer claimed that the fusion construct is 99.4 per cent identical in amino acid order to the natural Cry1Ac protein, the biosafety scientist finds the fusion is a maximum of 94 per cent identical to Cry1Ac and only 95 per cent identical to Cry1Ab. “What appear to be small differences can be physiologically and immunogenically important,” warns the report. Heinemann explains that at 94 per cent identity, there could be up to 70 different amino acids. “To conclude that a novel protein is likely to be of no safety concern because of even as few differences as seven amino acids is not a research-based conclusion” because changes of single amino acids can significantly alter the characteristics of proteins. The impact of poor initial characterisation includes: distrust of the detection method (which EC-II claimed without evidence was specific to Bt brinjal) because failure to properly confirm the number and structure of inserts undermines the design of the tools used to confirm transfer of the recombinant DNA through crosses; and invalidation of conclusions surrounding unintended changes.

In an interview to DTE, Heinemann says, “Every experiment I personally reviewed seemed to have some significant flaw, or was only half finished, effectively leaving nothing to support the conclusions of safety. It had the semblance of authority, but lacked the substance” (see ‘Bt brinjal has no history of safe use’, www.downtoearth.org.in).

Critically and most importantly, the developer used a plasmid that was designed to transfer in toto. This has also been stated clearly by Monsanto which provided the developer with the plasmid. Yet, Mahyco, which is part-owned by Monsanto, and the two expert committees advising GEAC repeatedly failed to appreciate the significance of the plasmid map itself which clearly showed only a single T-DNA border sequence, and ignored the reports from independent scientists who alerted EC-II to this.

Mahyco has yet to respond to questions on these issue sent by DTE.

The Heinemann report, which is a more comprehensive evaluation of findings submitted earlier to MoEF, was prepared following a request to INBI whose mission is to assist civil society to find answers to questions raised by biotechnology. The tools it develops are available for free public use, but are optimised for those countries such as India that have ratified the Cartagena Protocol on Biosafety. The developer claimed that there was a single insert into the brinjal genome and that it corresponded to just the Cry1Ac-like gene intended for insertion, but Heinemann claims there are several reasons this evidence is incapable of demonstrating the required proof. For one, the only probe used was described as just “Bt”. Worse, no information was provided about sensitivity of the probe.

The report comes in the wake of FBAE secretary C Kameswara Rao calling for the removal of “unjustified and arbitrary constraints that jeopardise the functioning and development of agribiotech research such as the requirement of permission of state governments for field testing of biotech crops approved by the regulator, and the threat of legal action against the use of indigenous germplasm to develop biotech crops for indigenous use. Other signatories include B Sesikeran, director of National Institute of Nutrition, who was a member of EC-II; Gurudev S Khush, World Food Prize laureate and adjunct professor, University of California; and Klaus Ammann, honorary professor for biodiversity at University of Bern.

ABLE-Ag’s contention that opposition to biotechnology is driven by vested interests rather than scientific analysis reflects the prime minister’s stance. It says India has “one of most stringent regulatory systems in the world”. But even as ABLE-Ag and FBAE were making a pitch for Bt brinjal, the states’ opposition to even field tests of GM in their backyard was mounting, with Rajasthan becoming the latest to join their ranks (see ‘Rajasthan bans GM trials’).
News News News university of Canterbury plasmid map Monsanto Monsanto Mahyco Latha Jishnu Jack Heinemann INBI GEAC FBAE event EE-1 event Cartegna Protocol Bt Brinjal ABLE-Ag
Donate Now