In the second week of January, the Bentara art gallery in the Indonesian city of Yogyakarta was full of paintings of geckos and crocodiles. Thirty three artists had come together to protest corruption in Indonesia. The subjects of their work were a take on the catchphrase “Crocodile versus Gecko,” coined by Indonesian Police chief detective Susno Duadji in his colourful comparison of the relative powers of the police (crocodile) and the Corruption Eradication Commission (gecko). 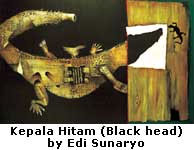 Susno was put off to learn the anti-corruption commission had dared eavesdrop on a conversation he had with the lawyer of a wealthy Bank Century depositor, allegedly asking for a slice of his legally disputed US$18 million deposit. The phrase assumed a life of its own, developing into a household battle cry for the war between the anti-corruption commission and the police.