How humans differ from primates 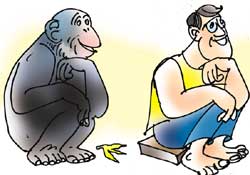 Human and chimpanzee genes differ by a mere 1.2 per cent, which is insufficient to explain the differences between the two species. About 30 years ago, Mary-Claire King and Alan Wilson had proposed it is not genes but their expression that differentiates us from primates. Now, Matthew Rockman of Duke University, USA, and colleagues have found experimental evidence to support the proposition.