Is far less than estimated 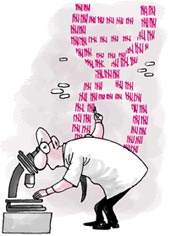 humans have 20,000 genes -- just a fraction of previous estimates. An international consortium of scientists has unveiled the latest figure by analysing the complete sequence of the genes.

Four years ago, it was thought that humans had some 100,000 genes. A draft sequence published in 2001 brought this estimate down to 30,000-40,000. Two teams fought to be the first to complete the sequencing: the International Human Genome Sequencing Consortium (ihgsc) and a private us company, Celera. ihgsc had a step-by-step approach to unravel the genome, which is slow but accurate. Celera used the fast track shotgun method, which involves decoding chunks of the genome and then reassembling the pieces like a jigsaw.

The ihgsc said a thorough check of its draft has weeded out numerous errors and inconsistencies. It now has only 341 gaps left in a code of 2.85 billion base pairs -- the rungs of the ladder containing the chemical recipe for life. The accuracy is about one error per 100,000 bases. This precision means the sequence will be the 'gold standard' for decades to come.

The decoded sequence, placed in the public domain, can be used for research on drugs and the genetic causes of diseases. The draft sequence has already revolutionised molecular biology by eliminating the need to clone and sequence genes involved in diseases.