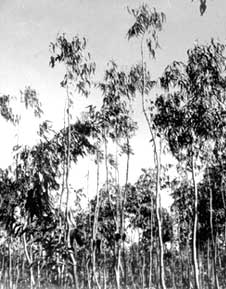 scientists have found a way to make eucalyptus and other trees grow a little faster. They have identified the key genes which are responsible for the development of wood in trees. They have also developed a new process for the testing of genes in the laboratory. Gerd Bossinger of the Hardwood Fibre and Paper Science Cooperative Research Centre ( crc ) in Melbourne, Australia, said this should lead to improvements in overall quality of a variety of timbers. This breakthrough also means that through artificial breeding techniques, researchers can test and screen the genes of trees in laboratories without testing in the field for years.

Even the foresters will not have to wait for decades. They will determine within weeks as to which trees are best to grow. Bossinger said trees could now be genetically engineered to grow quickly with improved wood characteristics, making them suitable for plantations. "This will ultimately help to lessen the logging pressure on our native forests," he said.

The applications of this new technology is enormous. It aims to use the existing genes in trees to create forests with an array of enhanced characteristics. "We will not be using the technology to introduce genes from other plants or animals into trees," said Bossinger. It makes this sort of genetic engineering extremely safe, he added. Mathew Leitch, a tree physiologist and tissue culture expert working with Bossinger, said one application of the technology was to produce trees with longer and thicker wood cells. "This would be attractive to the pulp industry as this type of wood would improve paper strength and quality," he said.

The scientists are also carrying out experiments to produce trees which would cut some of the environmental and economic costs of pulping and bleaching wood when paper is produced. Such a feat could save the paper industry millions of dollars a year. Bossinger said the technology, which has been patented, was possible because of the mix of researchers involved. "The Hardwood crc brought researchers from different scientific disciplines to work on this project," he said. This has meant that the goals have been achieved faster than would have been possible if scientists had worked individually. "The team isolated genes that specifically control wood formation in eucalyptus globulusalso known as Tasmanian bluegum and then developed a process for growing wood in a petri dish in the laboratory. A further step was to use new methods for introducing the wood formation genes into the laboratory cultures," said Bossinger.