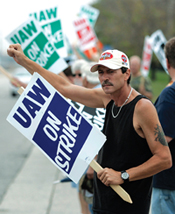 a strike by 73,000 workers against the largest automobile company in the us was called off 48 hours after the workers had begun picketing. The first nationwide strike in 37 years against General Motors (gm) ended with with a workers' union reaching a deal with the autocompany.

The strike was called by the United Auto Workers (uaw) union over healthcare benefits and job security. The union called off the strike on September 26, claiming victory. Ron Gettelfinger, uaw president, said the deal will "keep jobs from being reduced". But Rick Wagoner, gm chief executive, said that the company had come one up in the affair. He contended the deal will "help gm plug the fundamental competitive gaps in our business".

In face of steady financial loss, the company is undergoing massive restructuring and has been clamping down on labour. As per the 'tentative' agreement, the union will henceforth control the healthcare fund, allowing the company to unload its liabilities. A trust, Voluntary Employees Beneficiary Association, will look after retired employees' healthcare. There will also be a two-tier wage system, which allows enrollment of new employees at lower wages than veterans. The new hires cannot enroll their dependents in health insurance plans.

Some workers say the agreement will enable the company to easily lay-off workers. Local media term the deal as "a historic restructuring of the company's obligations for retiree healthcare, and a mechanism to buyout many of its current workers and replace them with new employees at lower wages". While the tentative agreement has to be ratified by uaw members, other us companies such as the Ford Motor and the Chrysler LLC have initiated negotiations for similar agreements with their workers.