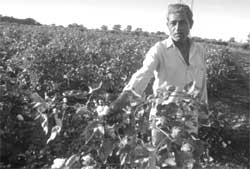 in what is perhaps the first large-scale 'genetic crime' to come to the fore, the Genetic Engineering Approval Committee (geac) ordered the destruction of the genetically modified cotton being cultivated across fields in Gandhinagar district of Gujarat. The geac is a committee set up under the aegis of the ministry of environment and forests to give approval for genetically modified products.

The transgenic seeds were sold to the farmers by Navbharat Seeds Private Limited, an Ahmedabad-based company. The geac committee members estimate that the seeds were sown some time in June this year, just days after the committee turned down an application for the commercial cultivation of Bt-cotton. The committee had refused to give environmental clearance and demanded fresh large-scale trials under the direct supervision of the Indian Council of Agricultural Research.

Many farmers had already reaped the first harvest. They were looking forward for a bumper harvest when they got a jolt. The presence of Bt-cotton plants was detected after 90 days . The crop reaches maturity after 120 days. In Bt-cotton, genes that produce a toxin are transferred from the Bacillus thureingiensis to cotton so that the bollworm that feeds on the plant is killed.

Relating the series of events that led to the discovery of these transgenic plants being cultivated, P K Ghosh, advisor to the department of biotechnology (dbt), informs, "The cotton crop has been severely affected by bollworm this year. Farmers found that even 15-16 sprays of pesticide were not effective. Amidst this, there were fields where the crop stood unaffected. This got the farmers and the Mumbai-based Maharashtra Hybrid Seeds Company (mahyco) suspicious who then reported this to the geac." Sleuths from the geac then visited the farmers' fields and on testing, confirmed the presence of the Bt gene.

After the discovery, the geac met on October 18 and decided to take stock of the situation immediately. It passed an order asking the district level committees of the Gujarat State Biotechnology Board to uproot and burn all the standing Bt-cotton crop, to recover the cotton and seeds harvested, to destroy the seeds of the company and set in motion a process to compensate the farmers whose crops will be destroyed.

It is believed that the offending company Navbharat developed the seed as a hybrid from transgenic seed imported from the us. The company might have bought the seeds from the us and crossed them with an Indian cotton variety to produce the hybrid. As these transgenic seeds were sold to the farmers extensively, the committee has asked the state committee to find out where all the crop has been grown.

The geac is baying for blood and promises to set an example by awarding 'exemplary punishment' so that others do not resort to the methods that Navbharat did.

When the committee met on October 18, it invited managing director D B Desai who sent his lawyer instead. Desai, who interestingly is a former employee of mahyco, has been called again on the October 31. If he fails to turn up, the committee plans to initiate criminal procedures against him. The committee has also directed that the crops be burnt and the farmers compensated by Navbharat Seeds.

dbt officials say that they now plan to ensure that there is no replay of this malpractice. "It is obvious that there is a need to raise awareness further about the legality of cultivating such crops," says Ghosh. "To prevent such incidence from recurring in the future, we will come out with a notification making the testing of seeds, brought from outside India, mandatory. Companies that do not comply will face legal action under the Environment Protection Act. We are also strengthening our laboratories -- the Lucknow-based Indian Toxicological Research Centre, the Hyderabad-based Centre for dna Fingerprinting and Diagnosis and National Institute of Nutrition and the New Delhi-based Tata Energy Research Institute -- so that these can detect transgenic material easily," he informs.

But according to Suman Sahai, President, Gene Campaign, "It is impossible for bodies like the geac to check the influx of genetically-modified crops into the market. The geac can take actions only when a report of any such incident is submitted to it. The only possible way of dealing with this situation would be to impose the heaviest kind of penalty, in order to set an example and prevent such incidents from happening in the near future." According to her, Navbharat Seeds should lose its licence for a minimum of three to four years thereby making a public demonstration of the kind of actions that would be taken in such cases. The government should now also ensure that all seed companies take a legally binding undertaking to not to use genetically modified seeds.

The geac estimates that the crop may have been sown over 1,500-2,000 hectares. Bolting the door after the horse has run away, the committee is downplaying the risk to the environment. Members claim that the risk can be controlled if the fields are strictly monitored.

Meanwhile, the farmers who have witnessed a bumper crop have to see their crop being burnt for no fault of theirs. They are adamant that no one can touch their crop unless they are adequately compensated.

Who is going to pay the compensation and how will it be fixed? When illegal use of Bt cotton seeds is not limited to Gujarat, how many cotton farms will the government burn? These are some pertinent questions that remain unanswered.