An ongoing debate in the UK questions the ethics behind the acquisition by the Royal Botanic Gardens at Kew of acquiring tropical plants through dubious means and using them to manufacture life-saving drugs, without any of the financial benefits reaching the countries of origin. 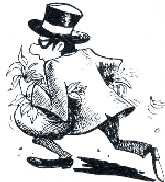 A RECENT article in The Guardian of London on the role played by the Kew Royal Botanical Gardens in tropical botany has sparked a debate regarding its acquisition of tropical plants. The article pointed out proudly certain plants in Kew Gardens have facilitated the discovery and exploitation of many modern drugs, including the AIDS drug catasnospermine, for example, which was first isolated in a rare Australian tree and found later in a common Brazilian tree that is part of the Kew collection.

Reacting sharply to the article, London Rainforest Action Group head George Marshall said, "Who profits from the practical applications of Kew's genetic stocks? In all the cases, those benefiting are those who obtain, control and exploit the specimens collected, while those who have a true stake in the forest, be they the people or the government of the source country, receive nothing." No scientist will allow someone else to claim credit for his or her discovery, added Marshall, and no company will freely share its research, even if the basis of such work lies in tropical forests.

Examples abound of Kew's genetic theft and their subsequent commercial exploitation. In 1876, wild rubber trees were covertly removed from Brazil and used to set up rubber plantations in Malaysia. As a result, Brazil's share of the world rubber market crashed from 95 per cent to 5 per cent. In another case, after permission to export was refused by Peru, Bolivia and Ecuador, Kew's botanists struck a deal with counter-revolutionaries to smuggle the cinchona tree out from the Andes.

Kew director G T Prance sees nothing wrong in garnering these extremely valuable plants and cultivating them elsewhere. He argues that they are merely attempting to conserve genetic diversity and increase the yield from these trees. But both arguments hold no water as studies done at Kew itself show the method of harvesting cinchona bark in Latin America supports the conservation of the tree. Nor was there a shortage of the drug: Exports climbed to 9 million kg a year before being wiped out by plantations in Asia.

The Kew Gardens repatriate species to the countries from which they came, says Prance, and Kew believes in sharing commercial gains from its genetic resources with the country of origin. Would the Indian tribes of Brazil and the Andes agree with Prance?