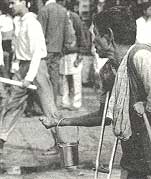 INDIANS are a peculiar lot. They have three 'unique' genes which are not present in any other race across the world. These genes, belonging to the group DR2, put them at a high risk of contracting diseases like tuberculosis and leprosy. The DR2 group has 11 sub-types of genes. The three genes have been isolated by a group of scientists from the New Delhi-based All India Institute of Medical Sciences (AIIMS) and University Hospital, Leiden in The Netherlands.

The findings, published in a journal on genetic research, Tissue Antigens, are likely to have an important effect on donor selection during organ and bone marrow transplantation. They are based on a study conducted on 192 Indian families from the states of Punjab, Haryana, Uttar Pradesh and Delhi. According to N K Mehra, an AIIMS scientist and a member of the research team, "These genes have neither been found in the western world nor amongst the Japanese or the Chinese." The study was initiated as Indian patients suffering from leukaemia, a blood disorder, failed to obtain donors from the registry maintained for donors all over the world.