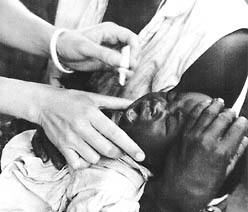 scientists in the us , Finland and India have reported significant breakthroughs in research that could help develop vaccines for rotavirus infection. Rotavirus infection is caused due to ingestion of the viral particles in water or other means of child-to-child infection. According to the World Health Organisation, the disease accounts for nearly one million deaths every year. The death rate of children below the age five due to diarrhoea is almost 25 per cent of all deaths.

The National Institutes of Health, Bethesda, usa , has recently developed oral vaccines for rotavirus infection in collaboration with Wistar Institute, Philadelphia, usa and other manufacturers. As these vaccines are based on animal strain of rotavirus (from a monkey or cow), they are called "reassortant vaccines". The animal strain of rotavirus has been modified by substituting gene segments from a human strain of the virus.

The recent trials of high dose oral rotavirus vaccine have shown positive results. The vaccine reduced severe diarrhoea illness by nearly 88 per cent. Researchers at the National Institute of Allergy and Infectious Diseases, Bethesda, usa , and the Instituto Biomedicina, Universidad Central Venezuela, Caracas, Venezuela, inducted about 2,000 healthy infants assigned to receive three doses of either the vaccine or a placebo at below four months of age (The New England Journal of Medicine , Vol 337, No 17).

While the vaccine was only 48 per cent effective against the first episode of rotavirus diarrhoea, it sharply reduced the incidence of severe diarrhoea as well as dehydration. These are life-threatening symptoms that need expensive treatment. The only adverse effect of the vaccine was the greater incidence of fever. About 15 per cent kids who were vaccinated, developed fever compared to seven per cent in the control group who were not vaccinated. Earlier trials of the vaccine with lower doses had not shown promising results.

According to Gerald Keusch and Richard Cash at the Harvard Institute for International Development, usa, it is still not clear whether the success of the Venezuelan trial was the result of beefed-up dose or attributable to differences in the study population.

The major drawback of the genetically engineered vaccine is its cost. The vaccine could be priced at nearly us $30 which is very expensive for people in developing countries. In this context, the report of two Indian research groups from the Indian Institute of Science, Bangalore and the All India Institute of Medical Sciences, New Delhi, to have isolated an asymptomatic strain of rotavirus assumes significance.

It is known that some children harbour a strain of virus that does not allow rotavirus to infect them. These scientists have isolated the strain from the faeces of such babies that might act as a vaccine and build up immunity against the diarrhoea caused by rotavirus. Clinical trials of the method are in progress in India and the usa.

In 1973, an Australian researcher Ruth Bishop had discovered the wheel-shaped rotavirus in small intestine of children suffering from diarrhoea. The diarrhoea-causing germ accounts for nearly 10 per cent of severe diarrhoea in children in developing countries. Unlike other diarrhoeal diseases, rotavirus infection indicates that health and hygiene may only serve a limited purpose, and may not bring the disease under control. So while rotavirus diarrhoea can be treated with oral rehydration therapy, public health experts still consider immunisation as the best option.