Germany ranked most energy efficient nation in the world

Washington-based non-profit ranks the US below India

Germany is the most energy efficient economy in the world, followed by Italy, the European Union, China, and France. This is according to the International Energy Efficiency Scorecard published by American Council for an Energy-Efficient Economy (ACEEE), a Washington based non-profit. Beating the US, India stands 11th in the list of 16 major world economies the council studied. The US was ranked 13th. India, along with Mexico, South Korea and Spain were the new entrants in the list.

In its second edition, the ACEEE report  analysed energy use at the national level, as well as in three sectors primarily responsible for energy consumption—buildings, industry, and transportation. Germany topped in the industry category, China in buildings and Italy in transportation. ACEEE Executive Director Steven Nadel said, “Germany is a prime example of a nation that has made energy efficiency a top priority. The United States, long considered an innovative and competitive world leader, has progressed slowly.” 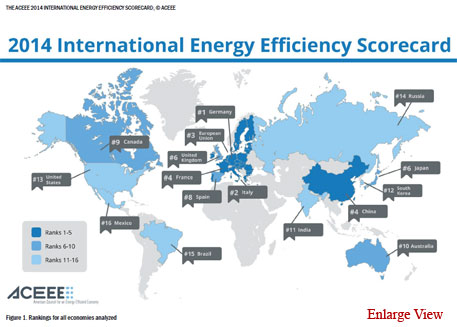 Delighted with the announcement, Philipp Ackermann, Minister and Deputy Chief of Mission, Chargé d’Affaires, Embassy of the Federal Republic of Germany said, “We will continue to strive for further improvements. Energy efficiency is the second pillar of Germany’s energy transformation alongside the expansion of renewable energies. Every kilowatt hour of electricity that is not consumed saves on fossil fuels and the construction of power plants and grids.” Down To Earth reported about Germany's energy transformation saying that the country is becoming a torchbearer in energy transformation.

The report points that US's energy story is disappointing. “The inefficiency in the US economy means a tremendous waste of energy resources and money. US falls behind Canada, Australia, India, and South Korea. These countries may have an economic advantage over the United States because using less energy to produce and transport the same economic output costs them less. Their efforts to improve efficiency likely make their economies more nimble and resilient,” says the report.