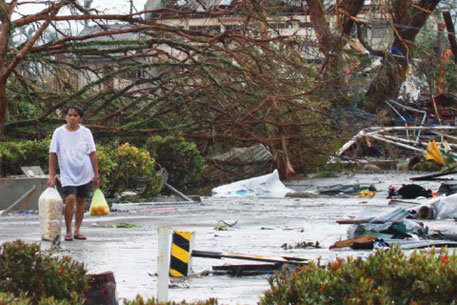 The World Meteorological Organization (WMO), a specialized agency of the United Nations, has put out a unique video campaign initiative to support UN Secretary-General Ban Ki-moon’s call for climate action. He has called world leaders from government, finance, business, and civil society to UN Climate Summit 2014 on September 23 at New York to galvanise and catalyse climate action to reduce emissions, strengthen climate resilience, and mobilise political will for a “meaningful legal agreement” in Paris in 2015.

WMO has invited well-known television weather presenters from different parts of the world and has provided them predictions based on the most up-to-date climate science. Presenters have been asked to imagine the “weather report from the year 2050”. The year 2050 was selected as mid way to the end of the century, when average global temperatures would have risen more than 4°C, if GHG emissions continue to increase at the current pace.

A teaser video has been released by WMO (see video below) showing climate change impacts. It features forecasts by presenters from different countries: a Bulgarian presenter shows a red map with temperatures of 50°C (122°F) – far above the temperature record for the country at 45.2°C (113°F) recorded in 1916; another presenter, Sam Champion, of The Weather Channel, is shown reporting on Miami South Beach being under water; and other TV personalities from around the world each present news for a particular country. The video predicts devastating climate impacts in 2050 with imagined weather forecast. The video stresses on the fact that “while climate change is global…. its impact will be local”.

WMO will be releasing news forecasts for the year 2050, from September 3 to September 22. Exact dates of release for each country can be found here at the WMO website.

These videos will reflect the actual climate change impacts predictions based on scientific facts accepted by global scientific community at large.