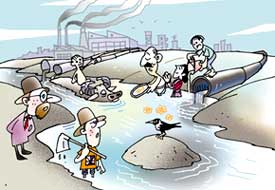 the Supreme Court (sc) recently ordered the Delhi government to study a proposal to install sewage treatment plants (stps) at the outfall of open drains that carry Delhi's sewage to river Yamuna. The order, issued on September 7, 2005, was based on recommendations made by Anil Baijal, secretary, Union ministry of urban development, in August 2005. "It has been given to understand that a variant of this strategy has been utilised in cleaning up river Thames in London," Baijal's report said. Earlier, sc had criticised an affidavit filed by Baijal in November 2004 in the 1994 case "And quiet flows the mailee Yamuna". The court had said Baijal's arguments comprised very conventional "hardware" strategy with relaxed deadlines.

But experts allege that even the Thames idea is merely a strategy to enable Delhi Jal Board (djb) to go ahead with its ongoing hardware work and revise its deadlines further: construction of stps and refurbishment of sewer lines by December 2007 and sewering of legal colonies and relocation of slum dwellers by December 2008. Unauthorised, unregularised colonies, which sustain over 40 per cent of the city's population, are not part of the plan.

During the hearing of the case in September 2005, Delhi's Solicitor General had accepted Baijal's observation that "in the manner and pace the work has been taken up in the last three years, we will not be able to achieve the objective of Class c quality water in Yamuna." If this was true, Baijal's plan, which is arguably a mere extension of the earlier strategy, would also be futile. But even Verinder Thind, project director, Yamuna Clean Up Programme, and djb superintending engineer, supported the plan: "We have seen this not only in Thames but also in Bangkok." sc was also informed that djb had invited Expression of Interest (eoi) from consultants and an agency would be finalised soon to look into cleaning the Yamuna. But analysis of the eoi revealed that djb had ignored some major issues linked to Yamuna pollution (see Down To Earth 'Wanted Yamuna counsel', August 31, 2005,)

In 1849, the Metropolitan Sewers Commission, headed by Joseph Bazalgette, a sanitary engineer, had proposed an improved sewer system for London with three main components: intercepting sewers, pumping stations and outfall sewers. On either side of the Thames, three main intercepting sewers captured the sewage from all existing sewers and carried it by gravity to river Thames. At Beckton and Crossness, the sewage was stored in huge reservoirs, from where it was released into the Thames at high tide to wash it into the sea. But the scheme had its flaws: it only worked for central London, transferring the problem to the downstream around the outflows, and incoming tides brought the sewage back. In 1882, new treatment methods were proposed; to be undertaken at Beckton and Crossness, these involved settling out solid matter from sewage effluent and its subsequent disposal at sea. A third sewage treatment plant (stp) was built at Mogden in 1936 for north and west London. Later, secondary treatment facilities were provided at Crossness stp (1964) and Beckton stp (1974).

Many institutional and regulatory models were tried subsequently.