Getting the tan right 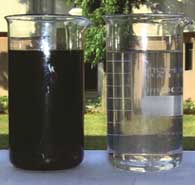 a group of scientists at the Chennai-based Central Leather Research Institute (clri) has developed two cost-effective and eco-friendly techniques to remove chromium from the effluents discharged by tanning units.

The metal exists in its highly carcinogenic hexavalent form (chromium vi) in the effluent. Currently, chemical precipitation methods are used to remove chromium, but they lead to the formation of chrome-bearing solid wastes, whose disposal again is a problem. Other methods available like membrane separation and ion exchange are expensive and also generate solid waste containing chromium.

clri claims the techniques developed are easy to adopt. One of the methods uses hydrogen peroxide with a zeolite (a porous substance) and organic copper complex based catalyst to remove chromium (vi). This process removes chromium about five times as fast as the other methods. Being porous, zeolite offers far more sites for the reaction to occur, enabling recovery of chromium in less than one hour at 60 o c. Studies on commercial tannery wastewater, indicates that the catalyst can be recycled without any large change in its efficiency.

The second technique uses a cheap, abundantly available seaweed, Sargassum wightii. The seaweed added to a chrome tanning solution fully removed the heavy metal in six hours. A maximum uptake of 35 milligrammes of chromium per gramme of seaweed was reported. Later, the chrome-loaded seaweeds were used to make chromium sulphate, which is a major tanning agent (Environmental Science and Technology, Vol 38, No 1, 2004). J Raghav Rao, who led the team, says that reuse of waste chromium added to the benefit.

"These methods are of special significance to the small and medium leather enterprises due to the cost effectiveness and environmental sustainability," says R Aravindhan, a senior research fellow at clri, who got the young scientist award this year from the Indian Science Congress for this work. Indian leather exports are suffering because of poor environmental processes followed in the industry, which is now showing "considerable interest in our work," says Rao.