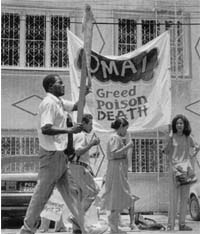 After an uneventful century of gold-mining in western Ghana, the November 1996 demonstration by the chiefs from Tarkwa region -- one of the country's richest gold-mining areas -- was viewed as a radical and unprecedented statement by the chiefs, who are normally subdued in their reactions. However, it was also the first to highlight the seriousness of the human, social and environmental costs being borne by the communities in the mining area.

The chiefs protests only mirrored the community's perception that the administration has not paid enough attention to their grievances.

Altogether, there are 10 mining firms -- mostly foreign -- operating in the Tarkwa region. Mining on such an extensive scale has led to a literal "minefield" of problems for the region's population.

Their plight came into focus after journalists from the independent Public Agenda travelled to Tarkwa to investigate the nature of the community's grievances. The mining firms were pushing locals off their land and offering ridiculously-low compensation packages in return. With money instead of their land, farms and homes, people soon found themselves wandering about in unfamiliar urban settings without a livelihood. Long-term alienation descended upon the chiefs of these demolished areas: without land and a people, their status as chiefs soon dwindled.

Continuous blasting by the miners severely affected the local buildings causing them to decay and develop cracks. Cleaning-up of vast areas of land for surface mining had transformed the rainforest area into a barren dust bowl. Most severe was the fatal cyanide spill from the us- owned Teberebie Goldfields Ghana Ltd in June 1996 which contaminated an entire river used by the locals for fishing and household needs leading to mysterious skin diseases and further contamination of acres of food crops.

Although the spill left nine villages without drinking water, it had not been reported in the media until late 1996 and worse still, no action was taken by the company responsible for the disaster to compensate the villagers for the lost crops.

The government's environmental committee suggests that the spill may not be the last. The committee discovered leaks in at least one of Teberbie's solution ponds which is near a stream used by the local villagers. The committee suspects that the solution's leakage has already begun to enter the stream owing to complaints of skin rashes by people crossing the stream and recommends action be taken to forestall another disaster.