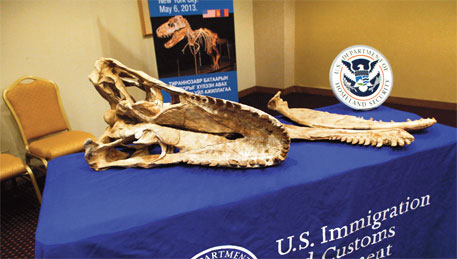 The US is to return more than a dozen illegally smuggled dinosaur skeletons to Mongolia, say American officials. The announcement follows the recent handing over of Mongolia’s celebrity dinosaur, 70-million-year-old Tyrannosaurus bataar. It was seized in New York after it sold at a Manhattan auction for $1.05 million.

The latest group includes two more Tyrannosaurus bataars, six Oviraptors and several Gallimimuses. US officials say the dinosaurs were smuggled into the US between 2010 and 2012.

Mongolia plans to open a dino museum to display the skeletons. “The recovery of this treasure trove is the latest significant step in returning missing pieces of the Mongolian people’s history that were literally dug out from under them,” said US Attorney Preet Bharara. Fossil export is banned under Mongolian law.