Else, Bt may become ineffective 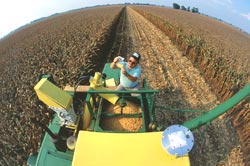 nearly one-fifth of the farmers in the us midwest are ignoring federal rules about how much transgenic maize they should plant, indicates a recent study. Experts fear this non-compliance could encourage pests to develop resistance to the insecticide produced by the crop.

Some transgenic maize contains a gene from the bacterium Bacillus thuringiensis (bt), which allows the corn to produce a natural insecticide. Under rules laid down by the us Environmental Protection Agency (epa), farmers who plant bt maize must devote 20 per cent of their acreage to non-bt varieties. The 'refuge' prevents pests from developing resistance to the insecticide -- resistant insects breed with their susceptible counterparts living in the 'refuge' areas and the 'resistant traits' gets diluted in the next generation.

A study released by the Centre for Science in the Public Interest (cspi), a Washington dc-based pressure group, reveals the rule is being ignored. The report cites data of the us department of agriculture. It shows that during the last year, 19 per cent of all bt maize growing farms in the states of Iowa, Minnesota and Nebraska failed to take the necessary refuge. No refuge was planted at all on 13 per cent of the farms. Most people ignoring the rules had small farms (covering an area of about 80 hectares). The defiance may stem from the fact that the Agricultural Biotechnology Stewardship Technical Committee, the industry's body monitoring growing practices, does not supervise small farms.

"It's just a matter of time before resistance develops," warns Gregory Jaffe, the report's author. bt maize will be rendered useless, adds Jaffe, if pests such as the European corn borer -- the chief target of transgenic maize -- develop resistance. But firms manufacturing transgenic crops disagree. "This won't jeopardise the long-term effectiveness of the technology," says Eric Sachs, director of scientific affairs at the biotechnology giant Monsanto. "It's not clear that we have a problem of biological significance, but we do have a problem of regulatory importance," says Val Giddings, vice-president for food and agriculture with the us Biotechnology Industry Organisation.