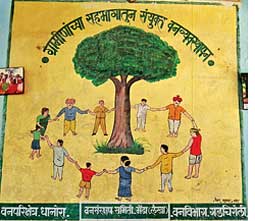 Managing forest resources comes easy to people of Mendha Lekha. The people of this forest village in Maharashtra's Gadchiroli district have nistar rights over 2 sq km of forest for more than 10 years. Now they have applied for this right over 18 sq km of village forest area under the Scheduled Tribes and Other Traditional Forest Dwellers (Recognition of Forest Rights) Act, 2006.

"The rights would help villagers bargain the price of important minor forest produce (mfps) like bamboo and tendu patta," contends Devaji Tofa, the head of the village. Adds he: "In the absence of a rights regime previously, a lot of these resources were harvested unsustainably by private contractors under licence from the forest department".

Under the present arrangement, the forest department is yet to give the villagers their share of the profits from the sale of bamboo and tendu leaves. People of Mendha believe that with community control these earnings will come directly to the people. "Given our dependence on the forest for leaves, grazing animals, fruits, firewood, and medicinal herbs, rights over 2 sq km of the forest were not enough to sustain the village", explains Tofa.

Mohan Hirabai Hiralal, social activist and head of Vrikshamitra, an ngo working in the area, agrees. "The village depends on mfps. So community rights hold more value for them."


Implementation of the Act, a process that began in February, is being affected by the three month time period the government has set for claiming rights with all the required proofs to back their claim. Under rule 12(4) of the Act, the government has to supply all the relevant documents to the people and rule 13 gives the list of documents that are required for the granting of rights. According to Hiralal, "three months are not enough for understanding the Act and then applying for rights. One needs to work extra hard to educate people about the provisions and benefits of the Act."

"Mendha was fortunate that they came to know of the requirements to apply for the community rights under the act on time or else they would not have been able to complete the application procedure by August 1", says Hiralal. "In case the community applies to the government departments for the various records needed for the application of rights under the Act and the departments fail to provide the details on time, the government will not be able to cite the non-availability of relevant documents as a reason to back out, since it will have only itself to blame," Hiralal says.


Mendha's gram sabha met on July 12 and 13 to discuss the application for community rights. But so far no government official has come to take the application from the village. In order to assist other villages, Mendha has distributed sample copies of the applications in the area and the gram sabha is openly sharing information with whoever comes to them for help. Hiralal feels that management of resources is more important than ownership. Taking cue from Gandhi's philosophy he states "decision making power should lie with the people, only then will they benefit in the true sense and the process will become democratic and de-centralized".