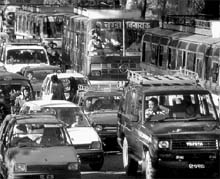 the Supreme Court of Nepal has once again come to the rescue of people campaigning for clean air. It has asked the government to explain its decision to allow Indian polluting vehicles into the country that violates Nepal's emission standards.

The petition, filed by Pro-Public, a Kathmandu-based non-governmental organisation, questioned the agreement signed between Nepal and India last year that allowed the import of any vehicle produced in India, which displays 'environment friendly' certificate from its manufacturer. A government certificate would then not be deemed necessary. Environmentalists believe this to be a violation of the Nepal Vehicular Emission Standard, which came into effect in 1999. "The agreement breaches Nepal Vehicular Emission Standard 1999, under the country's Environment Protection Law 1996, and Environment Protection Regulations 1997," says Prakash Mani Sharma of Pro-Public. Nepal Vehicular Emission Standard 1996 makes it mandatory for any vehicle entering Nepal to have a certificate of Conformity of Production and Type Approval given by the producing country's government or government institutions.

The environmental community in Nepal is up in arms. "The prime minister's decision not only goes against the government's anti-pollution drive, it shows a serious weakness in the political commitment," says scientist, Toran Sharma, of Nepal Environment and Scientific Services. "The government makes commitments for the cause of environment protection on one hand, and takes decisions overriding its commitment on the other. We can expect the number of polluted urban areas to grow," he predicts.

The prediction does not come without evidence. Hundreds of polluting vehicles have already entered Nepal in the last three months. Experts fear the agreement that allows vehicles with Type Approval certificates, from manufacturers, to enter the country has the potential of converting the country into an auto-dumping site. Indian manufactured vehicles fail to meet the Nepali version of Euro Emission Standards-I. Kedar Sharma, environmental journalist says: "It is deplorable that the democratic government goes against laws and its own decisions."