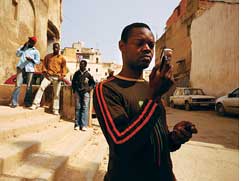 "My cellphone is the only thing left that occasionally makes me smile when there is little left to laugh about," says a Zimbabwean who does not want to be named. A cellphone has become more than a tool for communication in Zimbabwe, it has assumed a new identity. Zimbabweans who can afford it use a cellphone to relieve everyday stress by exchanging political messages with friends and relatives.

Post June 27's one-man election, one of the most widely circulated text messages goes: "The run-off is over, now it's time to run away to the diaspora ..." Another suggests a beauty contest between the daughters of Morgan Tsvangirai and Robert Mugabe as the electorate was denied the chance to choose between their fathers.

With advertising space shrinking in newspapers in the economic downturn, companies are making use of sms to advertise. "We offer South African, Namibian, Mozambican and Chinese visa services," reads a message.

But the real clincher is the SMS about how "criminals robbed the Reserve Bank of Zimbabwe today and got away with Zimbabwean $100-trillion. Police are still looking for a motive".