This time, the level stayed above 400 ppm for a month, leading researchers to call it ‘a milestone’ for the planet on its way to unprecedented climate change 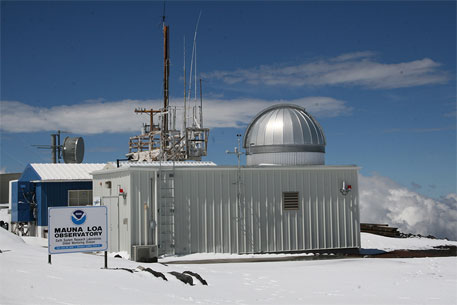 Record concentration of carbon dioxide (CO2) in the atmosphere was reported worldwide in the past two months, which scientists feel, marks a significant milestone as far as global warming is concerned, according to news reports.

Latest figures released by US’ official weather and ocean science agency, National Oceanic and Atmospheric Administration (NOAA), show that for the first time the parts per million (ppm) of CO2 in the atmosphere stayed over 400 globally for a month.

The latest observation indicates the amount of greenhouse gases in the atmosphere and the current concentration is unprecedented in a million years. The new global record follows the breaking of the 400-ppm CO2 threshold in some local areas in 2012 and 2013. It comes nearly three decades after what is considered the “safe” level of 350 ppm was passed.

This is not the first time that the atmosphere breached the 400 mark. Two years ago, the NOAA-run Mauna Loa recording station in Hawaii reported such an occurrence.

“This marks the fact that humans burning fossil fuels have caused global carbon dioxide concentrations to rise more than 120 ppm since pre-industrial times,” Pieter Tans, the lead scientist on NOAA’s greenhouse gas network, was quoted by The Guardian as saying. “Half of that rise has occurred since 1980.”

According to CO2Now.org, a self-fund project that collates international climate data, the safe limit for atmospheric CO2 is 350 ppm. Atmospheric CO2 levels have stayed higher than 350 ppm since early 1988. 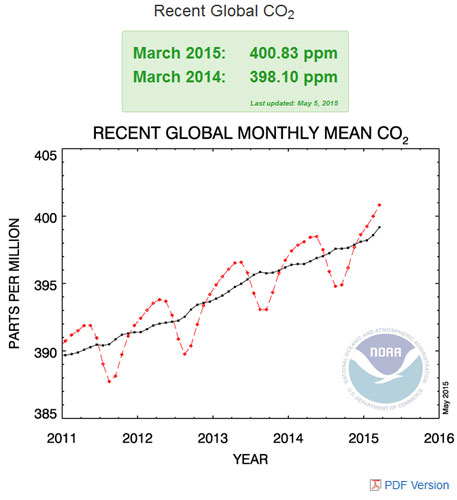 The recent observation is significant as countries are due to meet in Paris in December this year to hammer out the new climate agreement. While the aim of the agreement is to control emissions so that global temperature rise is kept under 2°C, economist Nicholas Stern warned this week that the intended emissions cuts announced by countries so far were not enough and could lead to a rise of three to four degrees.

Ed Hawkins, a climate scientist at the University of Reading, UK, was quoted by The Guardian as saying, “This event is a milestone on a road to unprecedented climate change for the human race. The last time the Earth had this much carbon dioxide in the atmosphere was more than a million years ago, when modern humans hadn’t even evolved yet.”

“Reaching 400 ppm doesn’t mean much in itself, but the steady increase in atmospheric greenhouse gases should serve as a stark reminder of the task facing politicians as they sit down in Paris later this year,” he added.