Global fertiliser use to surpass 200 million tonnes in 2018: FAO report

Overall fertiliser use in sub-Saharan Africa projected to grow the fastest in the world, Asia as a whole is the largest consumer of fertilisers 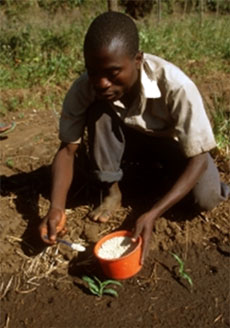 Global fertiliser use will surpass 200 million tonnes in 2018 while the world’s fertiliser consumption will grow by 1.8 per cent a year through 2018. This has been said in the Food and Agricultural Organization (FAO)'s new report, “World Fertilizer Trends And Outlook to 2018”, a press release by the United Nations body said on Monday. ;

At the same time, "the global capacity of fertiliser products, intermediates and raw materials will increase further," the report said.

As the potential to produce fertilisers will outpace their use, the global potential balance - a technical term measuring the amount available over actual demand - will grow for nitrogen, phosphate and potash, three main soil fertilisers.

Global use of nitrogen, by far the largest fertiliser base, is projected to rise 1.4 per cent each year through 2018, while phosphate use will increase 2.2 per cent and potash 2.6 per cent. In comparison, the supply of those three critical components is expected to grow by 3.7 per cent, 2.7 per cent and 4.2 per cent per annum, respectively, according to FAO's outlook report.

Fertiliser use will vary widely by geography in coming years, with sub-Saharan Africa posting robust demand for nitrogen and potash, albeit from low current usage levels.

Asia as a whole is the largest consumer of fertiliser in the world and relies on imports of all three major nutrients. That's the case even as West Asia continues to supply an important surplus of nitrogen, phosphate and potash.

Europe as a whole will also offer a surplus of all three nutrients due to large positive balances in East Europe and Central Asia. Fertiliser use through 2018 is expected to be flat in Western Europe while growing 3.6 per cent a year in the easternmost subregion.

Latin America and the Caribbean will depend on imports of all three during the forecast period, during which the region's use of fertilisers is expected to grow at a robust 3.3 per cent annual rate, according to FAO.

Even though overall fertiliser use in sub-Saharan Africa is projected to grow at a 4.7 per cent annual pace, the fastest in the world, Africa will remain a major exporter of nitrogen, providing an additional 3.4 million tonnes to the global balance.

The report does not forecast future prices, but notes that fertiliser prices, after a surge in 2011, were broadly lower in mid-2014 than in 2010.

World fertilizer trends and outlook to 2018