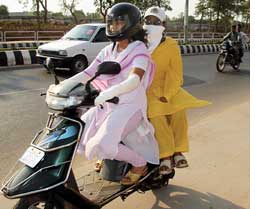 declaration of heat wave in Orissa has become an annual affair. This year, till May 2, 54 persons had succumbed to the heat wave; the official death toll was, however, nine. The year 1998, termed killer summer, saw more than 2,000 deaths. Casualties have fluctuated (see table Killer on trail) but the temperature has increased.

There has been a 1C rise in temperature between 1950 and 1990 and increase of 0.12C between 1993 and 2006, says Surendra Nath Pashupalak of agro-meteorology department of Orissa University of Agriculture and Technology (ouat), Bhubaneswar. The reason, he says, is global warming, which is also responsible for summer setting in earlier and lasting longer. Summers now begin in February and end in June. Earlier, it lasted from March to May.

Heat wave in Orissa is usually attributed to north-westerly winds blowing from Rajasthan, Gujarat, Punjab and Haryana, which contribute significant amount of heat to the air over Orissa through advection (horizontal transfer of heat). But Pashupalak says local factors are responsible for the heat this year. When temperature in isolated heat islands in Orissa was soaring to about 40C, Rajasthan recorded around 37C. Heat islands are places of intense and concentrated heat with a high concentration of greenhouse gases (ghgs), he said. Jharsuguda, Talcher, Keonjhar and Bhubaneswar have been identified heat islands and local factors contributing to the heat vary. While mining is the culprit in Jharsuguda, Talcher and Keonjhar, rapid urbanization is to blame in Bhubaneswar. 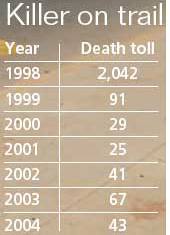 According to Biswajit Mohanty, secretary of Orissa Wildlife Society, industrial activities and shrinking forest cover led to an increase in ghgs. Increasing industrialization is bound to take a toll. The current power generation of 5,500 mw by coal-based thermal power plants is expected to increase to 35,000 mw with more plants likely to come up in future. The quantum of heat in the coal belt of Talcher which recently recorded 45C, may leapfrog, Mohanty said.

Criticizing the states forest protection measures, Mohanty said while government claimed it added 21 sq km of forests in 2004-05, loss of forest cover in 2002-03 was 472 sq km. Jharsuguda and Khurda have lost half their forest cover, said Pashupalak. No wonder, the state turns into a boiling cauldron every year, he added.