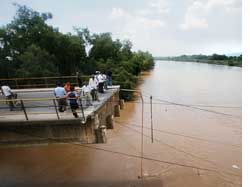 A special glass that makes steel stick to concrete

on may 28, an earthquake struck Honduras in Central America. The La Democracia bridge on the Ulua river collapsed. It had been there since 1963 when the French built it. The main reason behind the collapse of bridges during quakes is the weak polymer coating that holds steel and concrete together.

Researchers at the Missouri University of Science and Technology in the US have developed a durable coating from a mixture of glass, an enamel containing calcium silicate particles, clay and water. When the mixture is heated to 760C, it adheres to steel and provides a stronger bonding with concrete than polymer coatings. It is well known that enamelled steel exhibits superior corrosion protection in harsh chemical environments. In this case, because of clay and calcium silicate, the enamel sticks better to the steel and prevents rusting, said the researchers in a release.

"The coating forms strong chemical bonds with both steel and concrete, and we have measured the resulting bond strength that is up to four times greater than that measured for polymer coated steel," said Richard Brow, professor at the university.

"The special glass is designed to allow the enamel to coat and bond with steel at a relatively low temperature," Brow added. He explained that bonding at low temperature ensures the expansion of enamel due to heat matches the expansion of steel and stress is reduced. A chemical reaction between the calcium silicate particles embedded in the enamel and the surrounding cement increases the bond with cement.

The coating material could help engineers build stronger bridges and increase the longevity of other steel-reinforced structures. The new coating is estimated to be costlier than polymer coatings but less costly than galvanized coatings, and better than both in strengthening the bonds between steel and concrete.

The researchers refused to reveal the composition of the glass because they have filed for a patent for this coating. They have licensed the technology to Pro-Perma Engineered Coatings in St Louis in the us.