Glycerin will be future chickenfeed 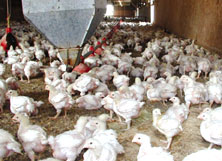 a team of us poultry scientists has found that glycerin, a high-volume by-product of biodiesel production, could be used as a feed additive for broiler chicken.

The study by the Center of Excellence for Poultry Science at the University of Arkansas seeks to address an anticipated glycerin glut as several countries plan to move to a biodiesel-blend regime in a few years. The proposed shift to biodiesel follows concern over depleting oil reserves. India plans to produce about 13 million tonnes of biodiesel by 2012-2013, which is about 1,000 times the commercial production in 2005.

As the production of biodiesel increases, so will be the glycerin generated. It will not be possible to consume all of it in conventional applications, the scientists led by Park Waldroup argue. It is mainly used in drugs and personal care products, as a food preservative and additive.A carbohydrate molecule that makes up 10-12 per cent of a typical fat, glycerin has a caloric value of 3.6 kcal/gm and is sweet in taste. In comparison, sugar contains 3.95 kcal/gm.

In a preliminary, short-term study, Waldroup and his colleagues found that chicken given glycerin up to one-tenth of their feed till 16 days of age did not show any adverse effects. This was followed by a full-term feeding study with chicks grown to market age to evaluate health of the birds and also the meat quality.

"Results of the study showed that diets with 5 per cent glycerine supported good performance, but when 10 per cent was added to the diets the flow rate of the feed was slightly reduced, hampering feed intake," Waldroup said in an article that appeared in the July 17, 2006 issue of Feedstuffs (Vol 78, No 28). Neither level of glycerine had any adverse effects on meat quality, they said. However, they recommended additional studies to evaluate potential effects of the meat quality.