GM or organic: The choice before African nations

An African Development Bank report pushes for GM technologies for achieving food security, while some African nations are showing the way with organic farming 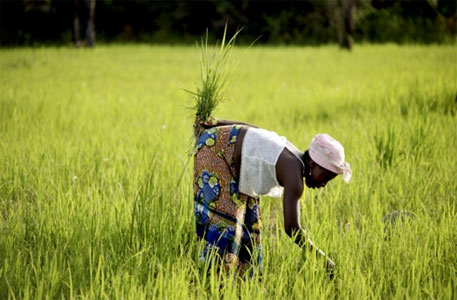 The dialogue on agriculture and food security in Africa is seeing the emergence of two voices. Even as people in some African countries choose organic farming in the interest of food security, a new report has recommended adopting biotechnological innovations like genetically modified (GM) crops to ensure local availability of food.

The report, titled “GM Agriculture Technologies for Africa”, was released by the African Development Bank (AfDB) and the International Food Policy Research Institute (IFPRI), an international non-profit centre based in the US, on Monday. It analyses the benefits and constraints of adopting GM technologies to address challenges related to population, poverty, food insecurity and climate change.

“Agriculture is an economic engine for Africa,” said IFPRI Director General Shenggen Fan in an official statement. “Biotechnology is among the various technologies being adopted by advanced and emerging agricultural economies and offers the potential to help millions of people become more food secure,” he added.

The report, however, notes that apart from a few, most countries in Africa have made limited or no headway in adopting GM technologies. Even as the merits of GM technologies are being debated, countries like Zimbabwe have shown how organic farming helped the country become self-sufficient in food.

When an embargo was placed on Zimbabwe in 2000, smallholder farmers in the country adopted organic farming to achieve food security.

Speaking to Down To Earth, Nelson Mudzingwa, national coordinator of the Zimbabwe Smallholder Organic Farmers Forum (Zimsoff), explained, “The embargo was placed after a land reform programme initiated by the then Zimbabwe President, Robert Mugabe. Zimbabwe had neither aid to buy food nor any support for procuring seeds. But we turned this bane into a boon. We went back to our local seeds and local methods of fertilisation of soil through manure-making, composting and biomass. With these methods, we have now achieved food self-sufficiency.”

Mudzingwa has warned against the entry of large agricultural biotechnology companies like Monsanto in organic farming. “We need to check Monsanto’s entry closely. If anything negative is found in their ‘organic’ claims, we must speak out against it like in the case of genetically modified food. A movement should be built against Monsanto in order to maintain our food sovereignty,” he said.

With inputs from Jitendra

GM agricultural technologies for Africa: a state of affairs