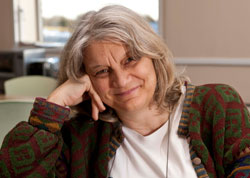 British researcher Cathie Martin, who had developed genetically modified (GM) purple tomatoes in 2008, is all set to conduct clinical trials using the juice and soup from the GM tomatoes this year. The purple tomatoes, which have been grown and are now being harvested in Canada, would soon be arriving in the UK.

Talking to Down to Earth via email, Martin who works in department of metabolic biology of the Norwich-based John Innes Centre, said, “We plan to do a pilot study on patients at risk of cardiovascular disease. All patients will be volunteers who will be informed that the juice is from genetically-modified tomatoes. Recruitment will be restricted to patients consenting to be volunteers in the full knowledge of what is involved,” said the researcher. “We have funding only for a study covering one year and markers for cardiovascular disease are the best and can report any effects reliably during such short studies. We are hoping to start recruitment within the next six months. Patients will be given a seed free, juice or soup in the studies,” he added.

Purple tomatoes have been developed by inserting two genes from snapdragon, a flower, in tomatoes to grow purple tomatoes that have health protecting anthocyanins. Anthocyanins accumulated in the tomatoes at levels higher than anything previously reported for metabolic engineering in both the peel and flesh of the fruit. The fruit has an intense purple colour. Anthocyanins are naturally occurring pigments found at particularly high levels in berries such as blackberry, cranberry and chokeberry.

Martin said, “There are some minor differences in structure of the anthocyanins in the purple tomatoes compared to those in blueberries or blackberries, but it is not known whether these differences impact health to any extent.”  The expert also said that the main anthocyanin in the fruit of the purple tomatoes is naturally made in tomato leaves and is nasunin, the anthocyanin in eggplant (brinjal) that is well known for its health-promoting properties. “In addition, the consumption of tomatoes does not usually involve consuming large amounts of sugar, which is one of the disadvantages of berries (try cranberry juice without sugar!),” he added.

The scientists claim that purple tomatoes have been shown anti-inflammatory effects compared to regular ones and also slow the progression of soft-tissue carcinoma in cancer-prone mice. They also have doubled the shelf life of the fruit.

The John Innes Centre (JIC), where these tomatoes were developed, is an independent research centre in plant and microbial sciences with a staff of over 800 people. Its research on purple tomatoes was funded by the European Union (EU) and through the JIC’s strategic funding from the Biotechnology and Biological Sciences Research Council.  Purple tomatoes were created using a grant of £900,000 from the European Union, but were grown in Canada as GM regulations across Europe make ¬production too expensive. 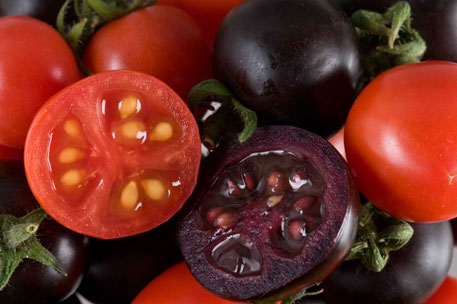 The tomatoes were grown at the glasshouse of New Energy Farms in Ontario, Canada, and are being harvested now. The grown variety is expected to produce around 2,000 litres of juice. New Energy Farms was asked to comply with all the regulatory requirements set by the Canadian government for the cultivation of GM plants in glasshouses. All of the plant material was incinerated following cultivation. The regulatory authority could access to inspect the greenhouses at all times to check on compliance. “By making juice, we have removed all the seeds from the product to ensure that there was no unintended environmental release,” explained Martin.

However, GMWatch, an independent international organisation and a watchdog on development of genetic modification technology, alleged that the Canadian authorities, by allowing growing of these GM purple tomatoes in their territory, have been “endarkened” by the pro-GM propaganda.

The organisation also said that there are over 200 types of fruits and vegetables like red cabbage, red onions, and berries which have red/purple pigments. Thus, one can have a diet rich in anthocyanins without resorting to GM purple tomatoes. What Cathie Martin and her colleagues have produced is totally unnecessary given the abundance of anthocyanins in food plants, said representatives from GMWatch. Tho clarify the same, they also cited an example of beetroot whose purple colour is not an anthocyanin but another antioxidant.

They have also pointed out that the researchers don’t mention the use of kanamycin (an antibiotic resistance gene) in their paper as the EU had said that antibiotic resistance genes should be present in the final GM plant. The GM watch researchers added that no generic toxicity testing results, either short-term or long-term, of these tomatoes has been published. Besides, no work has been done to see if nutrient content is preserved during the time of extended shelf life. If the nutrient content is not preserved, then it’s a rip-off in terms of what the consumer is getting. They also said that these clinical trials are a violation of EU regulations for genetically modified organisms (GMOs) as human trials are being conducted before animal testing.

When asked about commercialisation of the modified tomatoes, Martin said that the only way for consumers to be able to access this juice was for it to be commercialised. For these reasons, the institute has formed a micro-spinout to develop a realistic business plan for how to could get the product to market. The researcher also said that the company, Norfolk Plant Sciences, will also be working for regulatory approval together with New Energy Farms, in Canada. “Human studies will run parallel to their activities to get regulatory approval for commercialisation, and if those studies indicate beneficial effects in humans, we will seek a functional food label for the juice,” explained Martin. He further asserted that the main aim of the team is to develop a healthy product that is reasonably priced so that people with poorer diets can access it – that is why everything has been done in tomato.