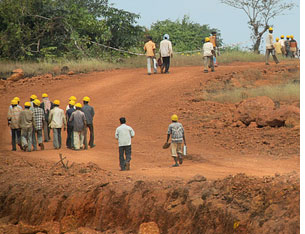 On New Year's eve, Goa Chief Minister Digambar Kamat declared that his government had decided "to do away with" the special economic zones (sezs) in their present form and had asked the centre to de-notify the approved sezs. This is, however, easier said than done.

Disparate voices have emerged from the Union Commerce Ministry in regard to the proposal. Commerce Secretary G K Pillai, who also heads the Board of Approval for sezs, said the state government did not have the power to scrap notified sezs. Commerce Minister Kamal Nath contradicted him. After a meeting with the Goa chief minister on January 3, he said there were "absolute provisions" in the sez law for changes, including a review of notified sezs. Rajeev Dhavan, senior supreme court advocate and a constitutional expert, believes that since the statute was framed by the centre only it can revoke it. However, he says that India's cooperative federalism system has enough space for resolving such disputes. No notification is irrevocable, he says.

The Congress has gone into overdrive to ensure that Kamat's rejection is not taken as the party's position on sezs. Congress spokesperson Abhishek Manu Singhvi told journalists that the party had no role to play in the Goa sezs and that it was a decision of the state government and the commerce ministry.

The Kamat government announced scrapping sezs after a panel set up to study their viability observed that "these tax-free havens were not right for Goa's development". The panel added that the proposed sezs would not match Goa's talent pool, nor create employment, but would burden the state's infrastructure.

This was the opposite of what former chief minister Pratapsingh Rane had written to the Union commerce minister on December 21, 2006: sezs would benefit Goa economically as well as help generate a lot of employment.

In 2006, the state government recommended 15 sezs to the centre. Seven were approved. Formal notification has been issued for three sezs: Meditab Specialties Pvt Ltd, Peninsula Pharma Research Centre Pvt Ltd and K Raheja Corporation Pvt Ltd. While Meditab got the permission to set up a pharma sez at Keri, Ponda, on 123 hectares (ha), Peninsula Pharma was to set up an r & d centre and a biotech park at Sancoale, Mormugao, on 20 ha. Raheja Corporation was to set up an it sez at Verna Industrial Estate on 106 ha.

But what the government proposed, the people opposed. On the eve of Goa's Liberation day on December 18, 2007, Goa's Movement Against sez convenor Mathany Saldanha declared: "We demand immediate de-notification of all notified sezs." People fear that sezs will strain the infrastructure, especially water and power, besides leading to an influx of migrant workers. " sezs will encourage real estate, leading to environmental degradation," says social activist Aires Rodrigues. The situation turned tense on December 23, when Saldanha told tourists to leave Goa by December 28 because the anti- sez agitation "could take an ugly turn".

Even as the administration tried to calm tempers, the chief minister met leaders of the anti- sez movement. The opposition bjp planned an agitation from January 1, while the Congress's partner in the government, the Nationalist Congress Party, declared it did not want any sez in Goa.

Goa's experiment with sezs ran into further trouble when a task force appointed by the chief minister to look into the Regional Plan 2021 noted on December 23, 2007, that " sezs are detrimental to Goa's interests ". The Goa unit of the Congress forced the Kamat government to do a reality check. An sez study committee set up by the Congress's Goa unit in its interim report stated that sezs in their present form were not in Goa's interests. Under attack from all quarters, the government recommended scrapping sezs.

This has upset the Goa Chamber of Commerce and Industry (gcii). "In the long run this will lead to industrialists avoiding Goa," said gcii president Nitin Kunkoliekar. But will the three developers, who have invested crores of rupees in the sezs, agree to shut shop? "The state government's recommendations apply only to projects that have not got permission. The sez policy has no clause to de-notify an sez that has been permitted," says Nitin Sardesai, counsel for Meditab Specialties, which has invested over Rs 200 crore in the project. Meditab Specialties has approached the Goa bench of the Bombay High Court, challenging the "verbal order" to stop construction. The controversy is not going to die soon.