Goa continues to mine illegally 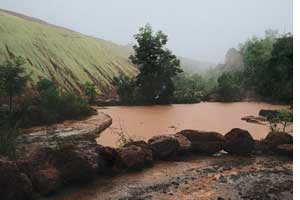 a government inspection of 48 mines in Goa found 35 of them operating without a lease. Some of them did not have mandatory clearances. A committee chaired by the state's chief conservator of forests in a recent report highlighted the extent of illegalities in the state's Rs 6,000-crore mining industry. The opposition bjp alleged the committee did not take action despite chief minister Digambar Kamat's directive to stop illegal mining on the spot.

The report blew the lid off companies that work without requisite clearances or renewals. These include heavy weight mining companies such as Sesa Goa Ltd, Salgaonkar and Brothers, and V S Dempo. Sesa Goa's lease at Advalpale in Bicholim expired in 2007, the report said. The other two mining giants' leases at Quella in North Goa and Sanguem also expired in 2007. The companies, however, continued to extract ore.

Mining 60 metres from the Netravali Wildlife Sanctuary in South Goa also serves as an example. The forest department had refused licence renewal in 1991 in "the interest of wildlife management".

But work was on in full swing on about 75 hectares of the mining area, the report said. "Fresh excavations for...development work to open up mine were observed in the portion of a hillock. A number of trees were also found to have been logged."

Shashi Kumar, chair of the investigating committee, recommended a notice to the owner, Kunda Gharse of Anvalimola Conserapeda Mines, for mining illegally and chopping trees without the government's approval. Several mines, the report added, operate near the Bhagwan Mahaveer Wildlife Sanctuary in South Goa.


Leader of opposition Manohar Parrikar said the report would make little difference. "The chief conservator of forests heads the forest department. In several cases, the mines do not have clearances from the department itself and yet the conservator has recommended cases to the department," Parrikar said. "He should have acted against illegal miners on the spot. The report is a faade." The director of mines, on the committee panel, could have acted immediately, he added. "One department will pass the buck to the other and illegal mining will continue." But the chief minister said the report made it clear the state government was committed to end illegal mining in Goa. "We are not giving new mining leases in the entire Western Ghats," Kamat said.

The committee was formed in the face of sustained pressure from non-profits and the opposition. They accused the Congress-led alliance of shielding illegal mining. Currently, about 100 mining tracts are leased for extraction of manganese, iron and bauxite ore, which is exported mostly to China and Japan. Illegal mining generates 18 per cent of the revenue.