Environmentalists in Goa are protesting the building of golf courses in the state, which they say will cause immense ecological degradation 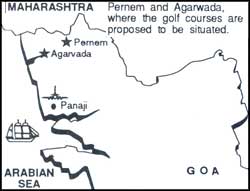 GOLF ENTHUSIASTS and promoters are heading for a collision with environmentalists in Goa. In a bid to lure Japanese tourists who are keen on the game, the state tourism department has approved in recent years various proposals to set up golf courses. As a result, the state has seen intermittent rounds of protest against golf courses by environmentalists who oppose reckless promotion of tourism in Goa because of the heavy demands, they contend, that will be made on its natural resources and dependent traditional lifestyles.

In June, the state government sanctioned two golf courses in Pernem taluka. According to the green lobby, golf courses are also being planned in Mandrem, Morkim and Arambol, all in Pernem. Tourism department officials have announced they are considering proposals to set up golf courses in Davellosim and Bambolim, two coastal villages which have seen a hotel boom in recent years.

In response, the Jagrut Goenkaranchi Fouz (Vigilant Goans Army), an environmental group in the state, began a campaign to inform people about ecological degradation caused by golf courses. The green groups have received much support in the rural areas where the golf courses are proposed to be built. Roland Martins, an opponent of the golf courses, asks, "Can any of you agree to courses that can be kept green only through round-the-clock watering?"

Other activists have drawn attention to the impact of zeolite -- a compound used to improve the texture of soil in the golf courses -- on the surrounding vegetation. They also point out that studies carried out in Japan have established the carcinogenic character of zeolite.

Another point of contention is the fact that many of the golf courses are planned to be built over village commons, which have been traditionally controlled by local institutions called communidades. As a result, village elders fear erosion of their traditional authority. Says Matthew Fernandes of Agarwada, where private real estate firms are prospecting the commons for a golf course, "This sport would make me a foreigner in my own land."

In an attempt to allay such fears, Goa tourism director U D Kamat says, "The question of golf courses using water provided for the local people does not arise as we shall provide separate tubewells." There have been also a spate of advertisements in the local newspapers claiming the golf courses will be set up only on barren land. But these assurances have found few takers. Many of the village committees have even threatened physical resistance to acquisition of land for the courses.

For the moment, the promoters of golf are relying on government support to bail them out, but given the determined front being set up against the sport, playing golf in Goa won't be easy.